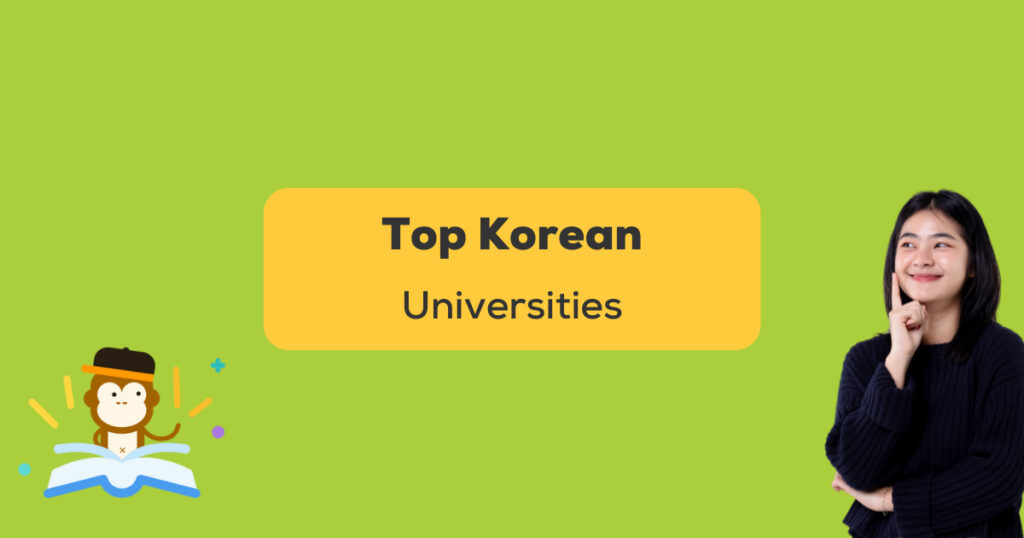 If you’re looking to improve your career and become a standout professional, studying in South Korea is an excellent choice! Get yourself familiar with top Korean Universities as well as the meaning of their names. Let’s see if any of these Universities catches your attention. Who knows? Maybe next year, you will find yourself studying at a Korean campus!

What Is The Word For ‘University’ In Korean?

You will see this word often in this article, so now that you have learned it let’s get to know about the best universities in South Korea.

Meaning: The word ‘Seoul’ (서울) is the name of the capital of South Korea. Next to it, you will see the word you just learned, ‘Daehakyo’ (대학교).

You have most likely heard about this University as it is the most famous and prestigious in the country. Founded in 1946, Seoul National University (SNU) has always been on the list of Top Universities in South Korea.

Among others, it is recognized as the most prestigious place in which many young people want to study, often working their hardest to pass the ‘Suneung College Scholastic Ability Test‘ after graduating from high school. This test is the most difficult exam in the world, and it marks the students’ careers, work, and even personal life. Without a high score on this exam, there is no chance of being accepted into Seoul National University, as it is the most competitive in the country.

However, you can take a breath now, as it is a completely different story for foreigners. As an international student, you don’t have to take that exam to be accepted.

But! That doesn’t mean it gets any easier during the admission process. SNU has a very low acceptance rate, from 15% to 20%, which means you need to qualify for the excellence that the admission panel is looking for in its students.

You will have to prove your competency as an academic with a high GPA, an admirable study plan, and a personal statement. In addition, you need to back up your application with quality letters of recommendation, a quality portfolio, if applicable, and any other achievements that you can mention to impress the admission panel.

According to my friends who have studied at Seoul National University, it is indeed much easier for foreigners to be admitted to this Institute compared to Koreans. But it doesn’t mean that you can get in easily, as it is still pretty tough.

Also, if you decide to study here, you can also rest assured that many courses are taught in English, especially in the engineering and business departments. However, you can always take Korean language courses on campus to increase your level of proficiency.

Meaning: The word ‘한국’ (Hanguk) is the name of the country in the Korean language. Gwahakk Gisurwon (과학기술원) means ‘institute of science and technology.’

It was founded in 1971 in South Korea as the Korea Advanced Institute of Science (KAIS), later merging technology to become the Institute of Science and Technology that it is today (KAIST). The purpose of this Institute from the beginning has been to increase the number of professional and talented scientists and engineers in the country, having the best structure of graduate and undergraduate education in Korea.

The United States Agency for International Development had a strong impact on the foundation of this institution, as well as the Korean president of that time, who supported the idea.

According to KAIST’s history written on their website, the people who designed the academic scheme were Frederick E. Terman, founder of Silicon Valley and ex-president of Stanford University, with Chung Geum-mo, a renowned professor at the Polytechnic Institution of Brooklyn.

So is this a good choice for international students? For sure! If you are looking for a science and technology university to study abroad, this is one of the best options.

But is it hard to get admission as an international student? Out of all the universities, this is one of the hardest to get into, but similar to SNU, the situation differs when it comes to foreigners. KAIST is interested in having potentially great talents studying on their campus, so they offer many scholarships for students who come from abroad.

Also known as Seongdae, it is a research university with an interesting history tracing back to the late Goryeo and Joseon Dynasties. Established in 1398 in ‘Hanyang,’ modern Seoul, it has seen many notable alumni across the centuries, such as scholars, monarchs, ministers, Philosophers, and even a Buddhist Monk.

The Institute has roots in Gaegyeong (Kaesong, North Korea) during the Goryeo Dynasty (Year 992), going through many changes. Until King Taejo relocated the Institute to Seoul and officially founded it with the name we know it today. So, while walking around the campus, you will be able to see the old building where everything started.

If you are interested in studying at this historical University, you should know that it is indeed one of the best places to study in Korea. Of course, it would depend on your major, as the departments with more prestigious and positive comments from students are medicine, chemical engineering, and semiconductor engineering.

The best part is that over the years, it has changed to be able to accept international students, offering more and more courses in foreign languages, including English. Don’t forget to email the admission department to inquire if your major will be taught in English or not!

Regarding how easy it would be for you to be accepted at Sungkyunkwan, even though it is currently one of the top Korean Universities, it’s fairly easy to get admitted as a foreigner.

Founded in 1885, it has a campus not to miss during a tour around the country. Out of many colleges in the world, it is one of the most beautiful.

Yonsei University has seen alumni such as Kang Kyung-Hwa, who was the Foreign Minister of South Korea from 2017 to 2021, and many illustrious people across the years.

If you are interested in applying to Yonsei and you have the leadership spirit that they are looking for in their students, you can check their site for scholarship opportunities. They have now the first English liberal arts college in Korea.

The admission rate at Yonsei University is much higher than at other Universities in South Korea, so you will have a bigger chance of being accepted! Besides, you can study Korean Language and learn more about its culture in the Korean Language Program (KLP).

Meaning: Ulsan (울산) is the name of a city in the South West of South Korea. Gwahakk Gisurwon (과학기술원) means ‘institute of science and technology.’

Located at Ulsan, in the North of South Korea, this University will welcome you with open arms, as it is not difficult to be admitted. Established in 2007 and opened in 2009, the main focus of this Institute is to develop the country’s industry and economy by having professional scientists with knowledge in technology and research experience.

A great example of a university that never changes its courses to Korean is UNIST. The classes will always be taught 100% in English, no matter how many Korean students join. It is, in fact, the only University in the whole country that offers an English education. So with this option in hand, you can rest assured!

Meaning: Goryeo (고려) is the name of the Korean Kingdom that lasted from 918 to 1213. It is, in fact, the reason why we know both the North and the South as ‘Korea.’ Foreigners weren’t able to pronounce ‘Goryeo’ properly, so to make it easy for them after the Korean war, they started to call both countries by the names we know today.

Established in 1905, with its former name ‘Bosung College,’ Korea University has become one of the most prestigious Institutes in South Korea. A part of the acronym ‘SKY’ together with SNU and KAIST, these have for many years been the top 3 universities that South Korean students want to be admitted at.

It is historically famous among locals for being the first institution that offered wide options of disciplines. In addition, its college of Law is known as the best in South Korea.

For your convenience, Korea University has a high acceptance rate, despite being part of SKY. Foreign students have a chance of 50% of being admitted.

Do You Want To Study In Korea? Start Learning Korean With Ling Today!

If you don’t get into one of the top universities in South Korea, don’t stress! Studying at a South Korean University is already good enough for your academic and professional development, as the country has a high educational level. The other universities I shared with you on the list are also excellent!
As you get more information regarding universities, start learning the language to be prepared for what is yet to come! Even if your classes are taught in English, living in Korea will require you to know the language, as people don’t speak English. Become completely involved in Korean society by learning their language, talking to natives, and making friends. You will see how your experiences are even more enriching.

If you enjoyed this blog, why not check out some others that have been popular recently on social media: money vocabulary in Korean and Korean ethnic groups.
Don’t waste any more time and start learning Korean with Ling! The most effective and engaging way to increase your language skills in no time. Download Ling App today!