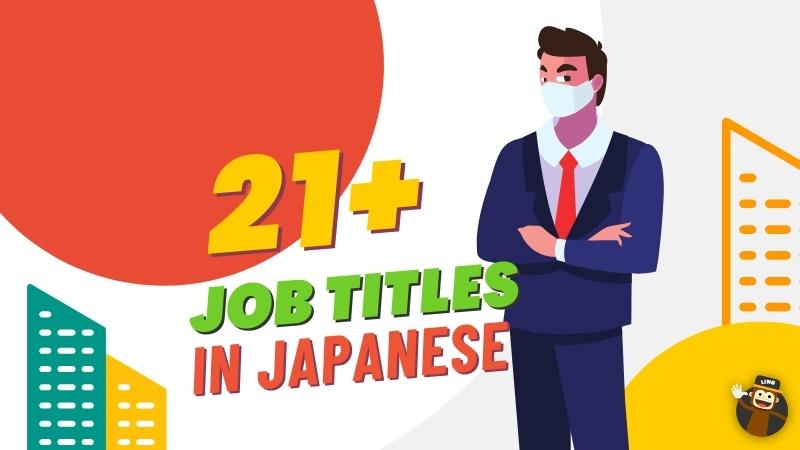 Japan relaxes its immigration restrictions for skilled foreign workers. Do you, too, wish to get employment in Japan?

If that's the case, you're probably scanning job postings for a job title first. Finding suitable employment for your background is only the first step; job titles in Japanese companies are also a factor in determining your duties and salary. After that, it'll be important to understand the culture of the workplace. Undoubtedly, there'll be certain adjustments because you'll be working in Japan and therefore not in your native environment. Japan's also notable for having a distinct approach to the workplace.

So, before we go into learning Japanese job titles, let's first familiarize ourselves with the Japanese workforce.

Because of the Japanese priority on collaboration, traditional job titles are often overlooked. The Japanese like to work collaboratively, adjusting their focus and taking on new tasks as the needs of the company demand, rather than depending on strict job descriptions. Everyone should be on the lookout for things that have to be done. When a new task comes up, team members usually divide it among themselves rather than asking the supervisor. The Japanese have been trained from a young age to work in this manner, so they have no trouble adapting to it. The Japanese are naturally adept at cooperating with others.

However, there're many businesses where everyone has their own responsibilities but still works together toward common goals.

Not to add any more anxiety, but it was reported in The Japan Times that 1 in 4 organizations have stated that their staff had previously worked around 80 hours of overtime each month. In addition, there were occasions when workers put in unpaid overtime. In Japan, working life has always emphasized total commitment to one's job. Despite the significant improvements to workplace practices, the country is still known for its dedication to the workplace.

However, Japan's working culture is gradually adopting more positive norms. The reduction in working hours is a significant improvement. And companies are doing their part to cut down on employees' hours spent on the job. For example, some companies turn out the lights in the workplace at 10 o'clock to prevent employees from accidentally working extra.

Tip: Want to blend in easily in a Japanese office? Use professional greetings like お世話になります (pronounced as osewa ni narimasu) with your coworkers instead of casual phrases.

Casual Titles To Use In A Japanese Office

Learning about job titles is essential for anybody hoping to work in Japan, whether they are international students preparing for a career in Japan after graduation or skilled foreign workers seeking to relocate to Japan. You might have noticed that Japan's workplace positions followed the same pattern as those in other nations. It's also important to note that Japan has a powerful internal seniority system in the organization. You may already be aware that Japanese politeness is legendary. Therefore, knowing the name of higher positions, especially those above you, can help you present yourself respectfully and appropriately when you meet them.

It won't take you very far in Japanese firms if all you know how to do is say the job titles in Japanese. But, if you want to work effectively with your Japanese coworkers, you'll need to improve your Japanese language skills. Then it's time to get the language-learning app that'll make everything more superficial in the long run.

Get the Ling App for your phone or tablet right this second! The most powerful program will supply you with vast resources before you even ask for them! Ling constantly keeps in mind that students want to acquire the language to use it immediately. As a result, we provide you with a wealth of essential vocabulary and authentic, native-speaker dialogues to practice with. The more you use our app, the more you'll start to recognize the subtleties of Japanese pronunciation. And when you make that jump from beginner to advanced, you'll understand. You can feel more confident about your next trip to Japan if you use Ling right now.

Are you ready to start now? So download the Ling App from the Google PlayStore and Apple AppStore now, and prepare to be fluent in Japanese very soon!