3 Best Reasons Learning Philippine History Can Help You With Tagalog 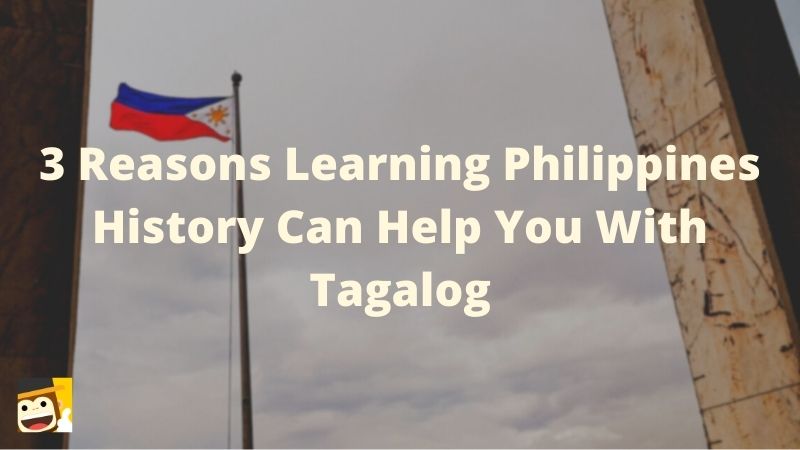 So, you’re interested in learning Philippine history and Tagalog, right? If you want to know the history of a country and its language simultaneously, things can quickly become overwhelming. But, we’re here to tell you that it will all be worth it! Whenever you want to learn a new language, it’s essential to learn the history of that language.

To help you out, we’ve put together this quick overview of Philippine history. If you ever feel overwhelmed, we’ve also included some important reasons for learning Philippines history to help you when learning Tagalog. As a bonus, we’ll also mention a great app you can try out to help you on your Tagalog language learning journey!

How Can Learning Philippine History Help With Tagalog?

Throughout our elementary education, we’re taught the history of our own country. But have you ever stopped to think that every other kid is sitting somewhere learning a different narrative? Studying the history of other countries will help you extend your knowledge and realize that the world is so much bigger than your country. It sounds obvious, but a lot of us forget this.

There’s so much to learn, especially from the past. Often, history teaches us important lessons and opens our eyes to things we’d rather not repeat. And when it comes to learning Tagalog, you’ll find it incredible how specific words have changed over the years! Want to learn more? Read an in-depth review here.

Reason #2: Develop A Better Understanding Of The World

By studying the history of the Philippines, we can learn how different today’s slang came into existence. We can use that information and compare it to where we are today to track our progress and perhaps get new ideas.

Maybe diving deeper into another country’s history will make you realize that the way their society operated was much more efficient and effective than your own. That discovery might lead you to develop some new ideas on how to go about problems differently.

In short, it’s always better to have more than one perspective. Learning about history means gaining new knowledge and insights about all aspects of life.

This reason is pretty straightforward and something we hope all language learners will experience. We want history to inspire individuals to greatness!

By learning about the past and the inspirational events that got us to today, you should be inspired to do the same for future generations. Remember that it only takes one great story to flood you with motivation to do great things and reach new heights!

Brief Overview Of The Philippine History

If you didn’t know, the Philippines is an island country located in Southeast Asia. The country is home to approximately 110 million Filipinos, and its capital city is Manila. If you’re looking for your next vacation destination, the Philippines consists of more than 7,000 Philippine islands and the Filipino people are some of the friendliest in the world! But, the country also has a rich and complex history for you to learn.

Of course, the history of the Philippines dates back long before 1521, but, unfortunately, the Spaniards destroyed any previous historical records in their effort to colonize the country. Much of what’s known about the pre-Spanish Philippines has to be taken from other countries’ accounts of the Philippines.

That being said, Ferdinand Magellan first landed in the Philippines in 1521. Oh, in case you were wondering, the Philippines gets its name from Philip II, who was the king of Spain at the time the Spaniards claimed the Philippines as its colony. The Spaniards instilled many belief systems into the Filipinos and the educational system, including the Catholic faith.

Under Spanish colonization, an order was placed for all indigenous populations and many Filipinos to have Spanish names. Parents often named their children after the saint whose feast day was their birth day. This is one of the many reasons why the Philippines is heavily associated with the Spanish language to this very day.

Spanish rule lasted until 1898, when the Philippines was given to the United States after the Spanish-American war. Then, in 1935, the Philippines finally gained some independence until the outbreak of World War II and the Japanese invasion. But, the Filipinos were freed with the help of U.S. forces and proclaimed the Republic of the Philippines in 1946!

From 1965 to 1986, Ferdinand Marcos ran the Philippines as president. However, he was driven from power due to his use of martial law, otherwise known as a military government, from 1972 to 1981. From 1986 to 1992, Corazon Aquino became president and instilled democratic rule in the country. Rodrigo Duterte has been the active sitting president of the Philippines since 2016.

Achievements Of The Philippines

During the late 20th century, the Philippines became a regional leader in education. They had a well-established public education system, including elementary and secondary education, and were praised for their literacy rates.

In fact, by the early 21st century, the Philippines had one of the highest literacy rates in all of Asia!

Do You Want To Learn More?

Whether you’re an avid language learner or this is your first time learning a second language, there’s one app you absolutely need to have!

The Ling App is a language learning app specifically designed to make learning a new language as smooth as possible for all learners. The app features lessons that will make you want to keep coming back for more, vocabulary words and phrases that you can use in daily life when conversing with locals, fun quizzes to test your knowledge, engaging exercises to practice your writing skills, feedback on your pronunciation thanks to the interactive AI chatbot, and much more!

Ling is also accessible to everyone, no matter what device you have. However, if you happen to face issues with the application, you can always contact Ling’s support team, and they’ll make sure to get the problem resolved for you right away!

Another fantastic perk of Ling is its free language blog. If you ever want to expand your knowledge about a specific language, country, culture, food, or learn some extra language tips, Ling’s blog is a great resource.

Start your language learning journey with Ling to finally start having some fun learning a new language!