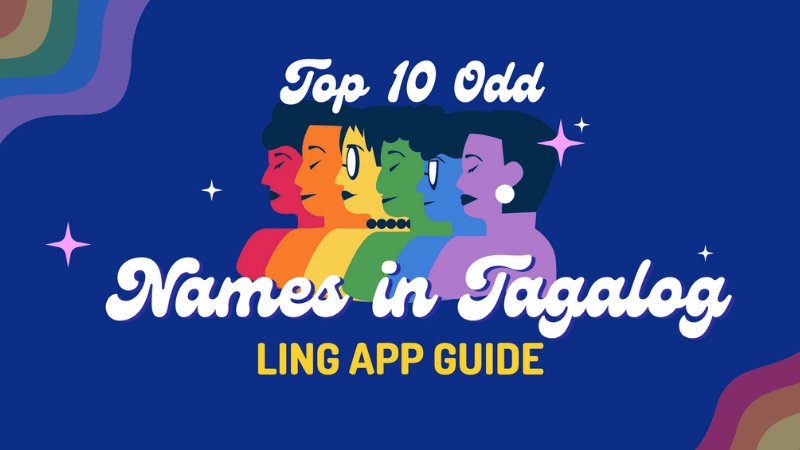 The pangalan or first names in Tagalog can be different from the naming conventions in Western countries. As a basis, the locals usually want the names to stand out or reflect a deeper meaning, so most of these may sound religious, interesting, or very traditional. In addition, a massive number of Philippine names are derived (or at least a variation) of Spanish and English, making it almost impossible to distinguish if the name "Joseph" is a Filipino, a Mexican, or an American! Let's get to know more about this in this post today!

Out of all the names globally, Filipino names can be considered one of the fascinating ones due to their distinct bizarreness at times.

In fact, who would ever believe that there are babies from here whose names are HTML, Covid Bryant, Pretty Nice, and Coviduvidapdap? Mind you, these are 100% real names given to Filipinos and are printed on their national birth certificate!

Somehow, these names are testaments to how humorous the locals are and the length they will go through to make sure their child's name will be one in a million!

As mentioned by Wall Street Journal, these strange names are not just given for the sake of attention but also to ensure that it stays unique to prevent future problems when dealing with identification check.

This shift in naming form is also prevalent in other countries because unique names are harder to confuse with making future transactions easier. Read on below to get to know more about the famous yet weirdest names in the Philippines.

The Oddest First Names In Tagalog

If New Zealand has "Talula Does the Hula From Hawaii" and the UK has "Cyanide," the Filipino people also have some of the best meaningful names you will never forget.

While you might think that this first name is just a random combination of letters, Dhrecxzeus is actually inspired by the Greek God "Zeus" and the name of the kid's father, "Dhrecxiar." Career-wise, the name certainly packs a punch as it sounds glorious or something that is out of historical movies set in Ancient Rome.

The name Sincerely Yours '98 may seem funny, but it actually symbolizes that the kid is the family's last child. To make matters extra interesting, this same family also named their children Macaroni '85 and Spaghetti '88. In one interview, the family shared that the names may sound a bit funny, but it has tremendously helped them fit in with society and land a job. In the same interview, they also mentioned that the siblings would not change their names if given a chance.

Looking for a Filipino name that is practically made of consonants? The sibling Dzywrygh, Djknyll, and Pzxydynn will seriously make you think twice! The siblings shared in one interview that their names may be difficult to pronounce, but these helped them gain more friends and have other people remember them right away.

Among the most challenging things that a new family has to face is how to name their child appropriately. For one lucky guy out there, he was brought to life and christened as Hitler Manila. Based on BBC reports, his name is indeed memorable enough, but it has caused cultural misunderstanding.

When Manila exposed his name while he was in Germany, the people looked at him with tense reactions as they couldn't believe that anyone will be named Hitler Manila.

This name from the Escobar family in the Philippines does not have any meaning, but it is still catchy. The bearer of this name states that he loved it because it made a mark on everyone he meets. In addition, he finds the questions about his name quite entertaining, which is why he will not change his name even if given a chance to do so.

This name is related to stenography and is popular due to its all-consonant form. Based on the social media account of this lucky person, the pronunciation of his name is “Eynjhyll."

This name was given to a bright young boy whose father served as an AFP personnel in the Philippines. His father was stationed at Fort William McKinley, where he got fond memories as a soldier.

This is basically "God is with us," but when it is spoken with a heavy Bisaya accent, the pronunciation can be Godis Withus. This Catholic name may sound weird at first, but it has helped the child in terms of finding comrades as people are naturally drawn to someone who seems unique!

A popular name from the Teletubbies, there are reports saying that a Filipino kid was named as such due to the popularity of the tv series.

Drink Water is a name that will never make you forget to drink. Based on interviews, the mother named the kid since it reminds her of what she felt while she was carrying her child: always in need of water!

First Names In Tagalog For Boys

First Names In Tagalog For Girls

As we reach this part of the post, we hope that you could get to know all the first names that you probably wouldn't ever expect to hear. If you enjoyed this post, feel free to review our previous discussion regarding Filipino names and critical information about the national language of the Philippines.

But, wait... would you like to master Tagalog and 60+ other languages? Then, it's time that you check out and learn about Ling App by Simya Solutions.

This language learning application is popular today, given its unique features that will motivate you to learn on the go. So, download it today and discover how AI and gamification can speed up your learning process.