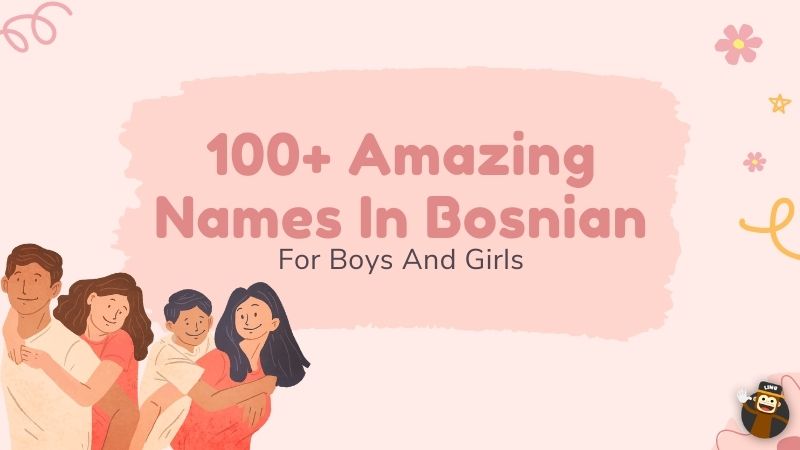 Need help selecting ideal names in Bosnian for your child? Let's find out the right Bosnian baby names that are purported to have varying influences on a baby's character.

Bosnians are people belonging to the country Bosnia and Herzegovina. Bosnians are a warm and inviting people with a unique sense of humor. Because Bosnians hold many religious views, the names in the country reflect this diversity.

Every parent is on the search for the perfect name for their child. But, for whatever reason, many people choose names that are not popular. However, this is an expensive mistake because you cannot change the name later.

We have all heard stories about parents naming their children that they later come to dislike. What can you do to avoid it? First of all, learn some basic Bosnian from the Ling App. To obtain a better idea, research and look over some popular baby names in Bosnian.

Names In Bosnian And Their Diversity

Bosnia is a multiethnic, multicultural, and multinational country with diverse cultures and names. Bosnian, a South Slavic language, is Bosnia, Herzegovina, and Serbian's official language.

If we talk about letters, then Bosnian has Cyrillic and Latin alphabets. It, however, has a few Persian, Arabic, and Turkish words in it. Also, due to Bosnians' interaction with several languages, many Bosnian names have Turkish, Persian, and Arabic origins too.

Bosnians' first names give information about their background and culture. Furthermore, Bosnian Muslims give their children names possibly derived from Arabic. They also place a high value on the significance of the name.

Christians and Jews in Bosnia and Herzegovina choose names from the Bible, Torah, and Old Testament.

Take a look at the list for help choosing a perfect Bosnian baby name for your child. We have compiled a list of the top Bosnian boy and girl names. Check it out.

Some people believe that describing culture as "Bosnian" is insufficient. The country has a diverse cultural heritage, and many individuals identify with numerous folk, religious, and ethnic identities.

The rich history of rule under former Yugoslavia, Croatia, and German occupation explains the diversity present in Bosnia. The Austro-Hungarian Empire and the Ottoman Empire have had the most influence. Finally, several civilizational periods have resulted in Bosnia drawing from Islamic traditions and Turkish cultural behaviors. It also includes some Christian customs and Western European principles.

As a Bosnian parent, you must make an essential decision while naming your child. It is entertaining, but the responsibility of naming another person is a big deal. After all, your child will have that name for the rest of their life.

By the time you find out you are expecting, you may have already started an extensive list of girl names, boy names, and gender-neutral names. Some parents start over with each kid, while others wait until the baby is born to name them. Each parent has the inspired names that they want to give their babies.

Thus, it is essential to consider the meaning of each name before settling on one. Consider the selections below and choose the perfect name for your baby.

Names In Bosnian For Boys

Traditional Names In Bosnian For A Baby Boy

So, what do you think is the perfect baby name? Let's look at some of the best traditional names in Bosnian for baby boys.

Modern Names In Bosnian For A Boy

Some people prefer modern names over traditional ones. Keeping modernity in mind, you can go with the flow. Otherwise, you can choose the traditional names. Some more names for boys in Bosnian are below. Have a look!

The Most Popular Bosnian Names For Boy

Sometimes parents love to choose popular names that belong to some famous personality. They believe that choosing popular names will have a positive personality impact on their babies. Therefore, the most popular Bosnian names for baby boys are present below to facilitate you here.

Names In Bosnian For Girls

Traditional Names In Bosnian For A Baby Girl

Children's names are deeply personal and essential to their identity. Parents with immigrant roots are well aware of this. We need to respect other people's chosen names because they put time and effort into deciding the traditional name.

Modern Names In Bosnian For Girls

The Most Popular Names In Bosnian For Girls

In Bosnian, there are several names for both boys and girls. We hope that you learned all of the Bosnian names in this post today. If you loved this post and want to learn more about Bosnian, we recommend checking out the Ling App.

Ling is the most convenient language learning platform. Ling App's lessons are present in the form of a game, allowing you to study while having fun. In addition, several Ling mini-quizzes assist in understanding errors and learning error-free words and phrases.

So, make no excuses and prioritize learning Bosnian over your other interests. You can also view recorded classes from native instructors in your hectic schedule. Ling App has a lot to offer in language learning.

You may learn all the vocabulary and pronunciation with this one-of-a-kind language learning tool. It will assist you in progressing from a primary language learner to a fully proficient language speaker.

So, what do you have to lose? Download it right away and start learning Bosnian! Push yourself and practice the language today. You will feel more comfortable using your newly acquired Bosnian skills. You can even read more Bosnian articles from "Basic Bosnian words" and "Basic phrases in Bosnian."

More From The Bosnian Blog