5 Types Of Nepali Pronouns With Examples: An Easy Guide 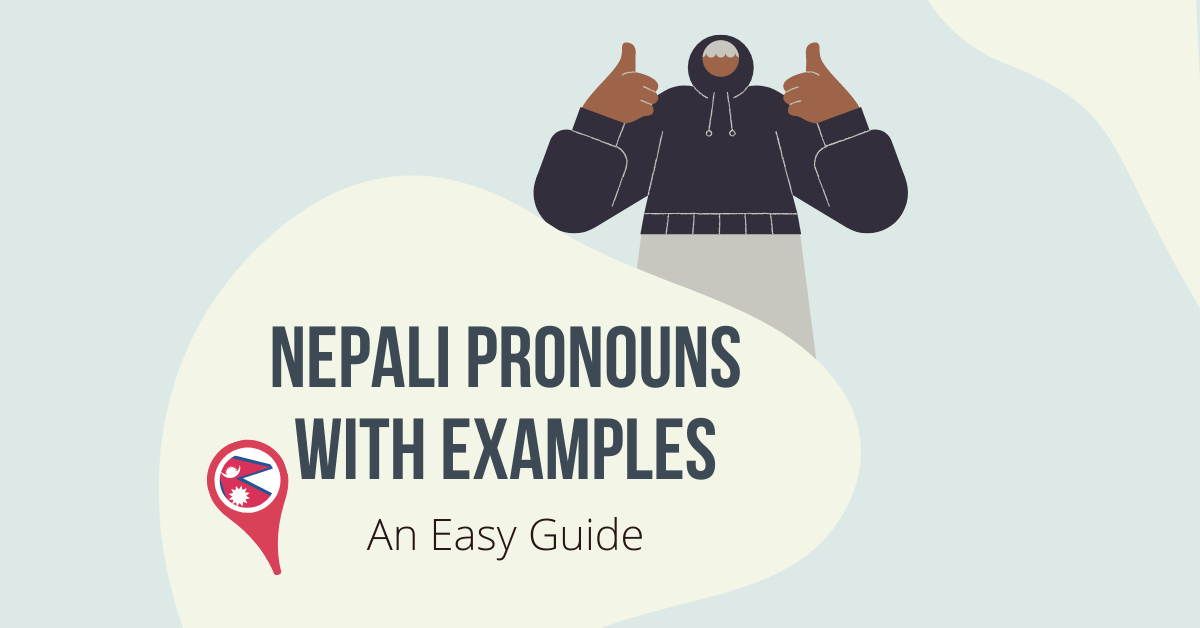 Like English, Nepali pronouns are words that replace a noun in a conversation. With the help of pronouns, we can shorten the sentence to the much-needed brevity. Pronouns can refer to people, objects, places, unknown objects, etc. Examples in English include I, we, they, it, that, who, etc. Pronouns are called सर्वनाम (sarwanam) in Nepali, where nam refers to "noun."

Nepali uses different pronouns depending on the required formality and the level of respect for the speaker. This system is likewise known as the honorifics.

Note: Do not say m, as it is nasal, not hieroglyph; name the word instead.

Pronouns are used to refer to the subject that is unknown as part of a question.

Pronouns that help identify an object by their proximity to the speaker.

A pronoun that refers to itself.

While English has possessive pronouns like your, my, etc., the Nepali language has no pronoun sense. Nepali does not have actual possessive pronouns because pronouns are inflected with a case marker to indicate possession instead. Since this changes the form of the pronoun, we'll look at that later. Below I will list some common ones for reference only and should not be considered true pronouns in the Nepali sense.

Note that the case marker used to change the pronoun also affects gender and number. Those listed below are singular, masculine/neutral. Possessive pronouns act like adjectives.

A pronoun is a word that replaces a noun. For example, he, she, they, a person, who. Pronouns can do all the actions or things that nouns can do. Also, we use it where the noun repeats itself.

E.g., Sarah is my little sister. Sarah is four years old, and Sarah loves to play with her dolls.

Sarah is my little sister. She is four years old, and she loves to play with her dolls.

Here, "Sarah" is a noun, and "she" is a pronoun that replaced the noun in second and third sentences.

Below is a list of personal pronouns, relative pronouns, indefinite pronouns, and reflexive or reciprocal pronouns in Nepali given in a table. Memorizing this Nepali pronouns table will help you add beneficial and essential words to your Nepali vocabulary.

Use of Nepali Pronouns in Sentences

Other Examples Of Using Nepali Pronouns

Proficiency In The Nepali Language

Like any other country, you need to find a way to learn essential words and phrases in the Nepali language to interact with the natives easily. Hence, join Simya Solution's Ling, Simply learn or Write Me to learn more than 60+ languages for your business to thrive, or you can use it while you travel.