14 Colors In Malay: Basic Tips You Must Not Miss Out! Apart from being one of the easiest languages to speak, the Malay language is also known for its wonderful, colorful culture. If you don't know yet, Malaysia is a multiracial country - the local citizens consist of multiple ethnicities, cultures, and religious identities. Yup, it's a beautiful mix of diverse backgrounds living harmoniously together as one whole community. This unique mosaic of cultures is undoubtedly one of Malaysia's colorful attractions.

Wondering how you can learn Malay culture? Well, you can start by learning how colors are pronounced in Bahasa Malaysia! Today's lessons will tell you everything you need to learn about colors in Malay - what is the vocabulary, how to pronounce them, and what is spelled.

Colors In Malay: The Basics

In Malay, a color is translated as warna. What if you want to refer to many colors? Well, the translation in Bahasa Melayu is warna-warna - the plural form of the word.

Some of you may have this particular thought in mind - isn't this color vocabulary similar to the Indonesian language? Simply put, the answer is yes. Still, Bahasa Malaysia and Bahasa Indonesia are definitely not interchangeable. In this case, most of the primary colors in Malay can be understood by an Indonesian. However, the spelling and pronunciation may differ. Plus, an Indonesian would not understand the names of tertiary colors in Malay because they are totally different in the Indonesian language.

So, there you go - a few things you need to know beforehand to add and widen your perspective on these Austronesian languages. 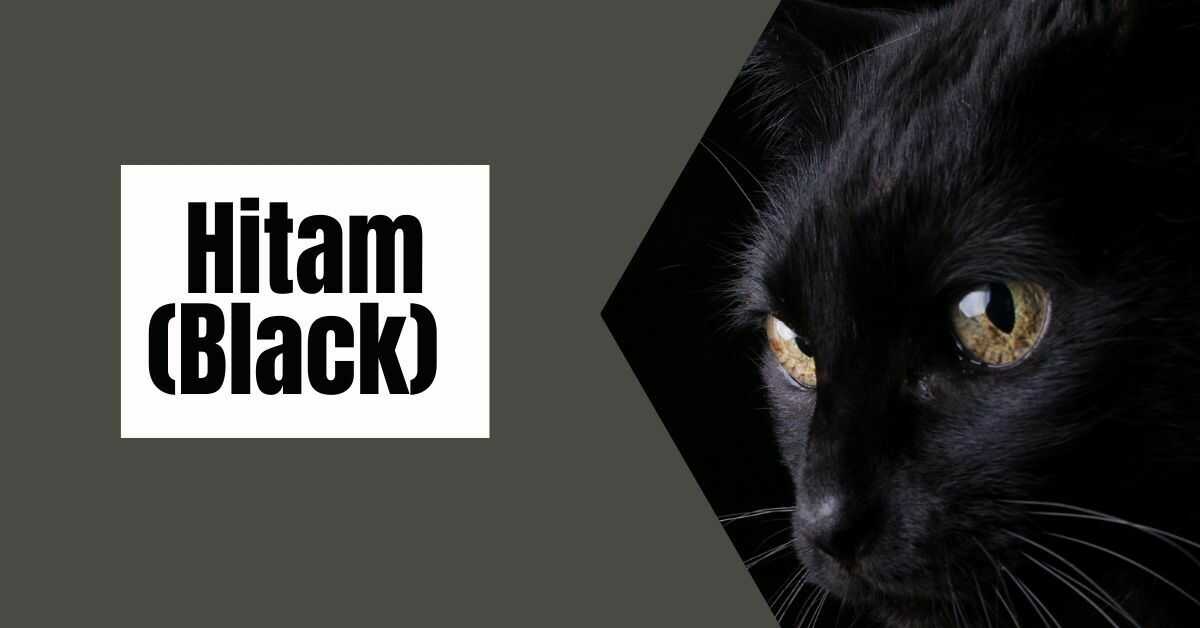 The translation of Black in Malay is hitam. This is one of the most important, definite colors that everyone needs in our daily lives. In the local culture, warna hitam carries its essential meaning that people from all walks of life find to be agreeable. Hitam represents an ambiance of seriousness, a tone of authority, and an essence of power. In traditional Malay belief (which is also deemed obsolete today), warna hitam (which means black color) is sometimes associated with an unfortunate, ill-fated, wretched, mysterious, or doomed sentiment. Yup, I bet you've heard this one before - you're cursed if you torture a black cat (or any other black-colored animals).

And to be frank, I, too, sometimes shake and tremble whenever I see black cats, black horses, or crows around. Haha, yup, I definitely watched horror movies a little too much. However, black: hitam is also considered one of the elegant and most sophisticated colors that fashion experts in Malaysia highly appreciate. 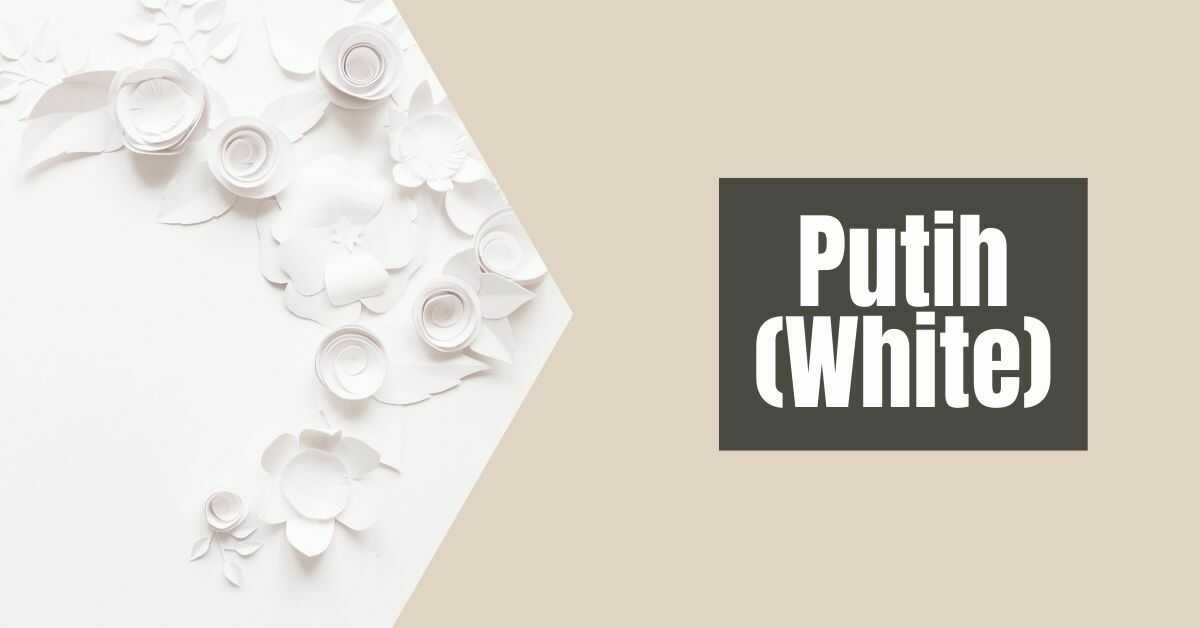 In Malay, white is pronounced as putih. This word brings many good feelings to those who hear and see it. So that you know, warna putih is highly regarded in my local culture. Why?

Ultimately, it's the color that native Malay speakers wear during blissful marriage ceremonies. Similar to the Western culture, the locals find warna putih to bear the sense of purity, virtue, innocence, and honor. Unlike warna hitam, warna putih embodies positive connotations rather than negative. Plus, Malaysians wear white on special lifetime occasions like marriage as it entails a white, blank canvas - signifying the start of something new. 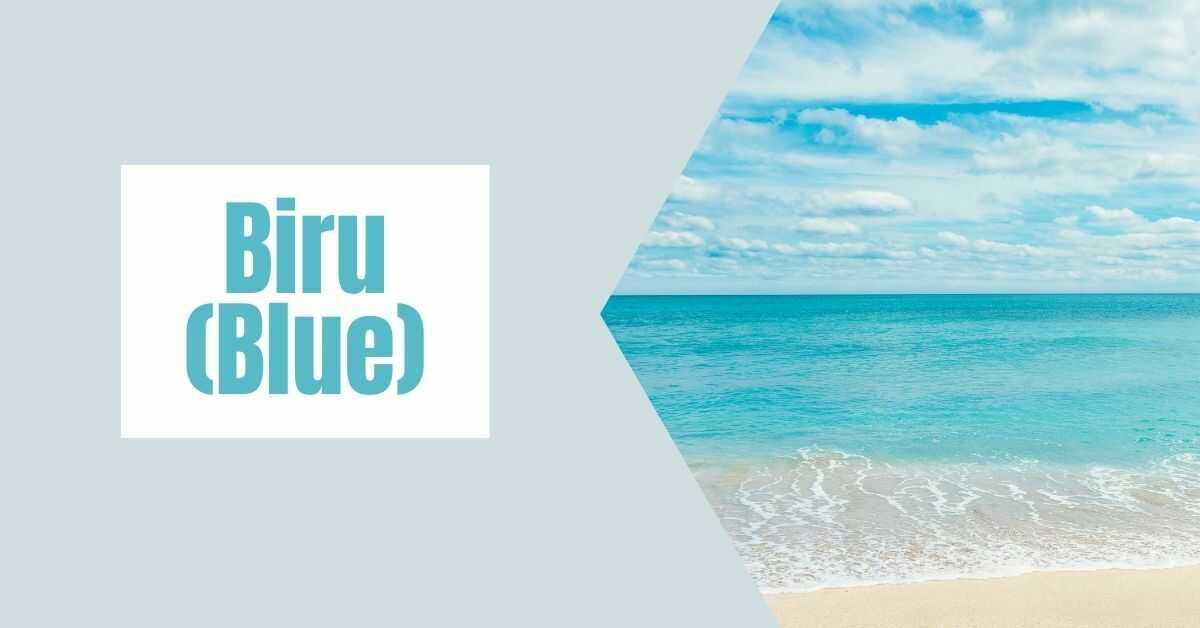 How do you say blue in Malay? In Bahasa Melayu, it is called biru. Warna biru holds the attribute of trust, intelligence, and authority. The soft blue color can give you the chills of calm, relaxing, and soothing sensation. Just so you know, the translation of warna biru in Malaysia gives a much more sentimental, patriotic value. Warna biru is a part of the Malaysian flag, known as Jalur Gemilang.

In Jalur Gemilang, the dark blue color represents the sense of unity, harmony, and integration among all Malaysian citizens, regardless of diverse cultural and religious backgrounds. In Malaysia, we also cherish and admire the calm blue sky and deep blue sea that we have here in our country. Wondering what's the translation for red in Bahasa Melayu? It's merah - the color that exhales audacity, boldness, passion, love, danger, and adventure. Warna merah, like warna biru, is also a part of Jalur Gemilang - it conveys the bravery, courage, and readiness Malaysians have in encountering any hurdles or challenges.

Other than that, there are a few significant things in Malaysia closely associated with this particular color. Yes - as you can see in the picture below, it is a red chili and the dancing dragon in a Chinese New Year celebration.

The majority of moms and dads here in Malaysia are highly fond of the red chili (which is called cili merah in Malay) as it's an essential ingredient upon preparing any dishes. Looking at the next photo, some may question why Chinese New Year, or CNY for short, is always red? Why red (warna merah) instead of green (hijau)? According to the local Chinese, warna merah emanates a sense of happiness, luck, love, and wealth. That explains why everything is decorated red whenever it comes to CNY. 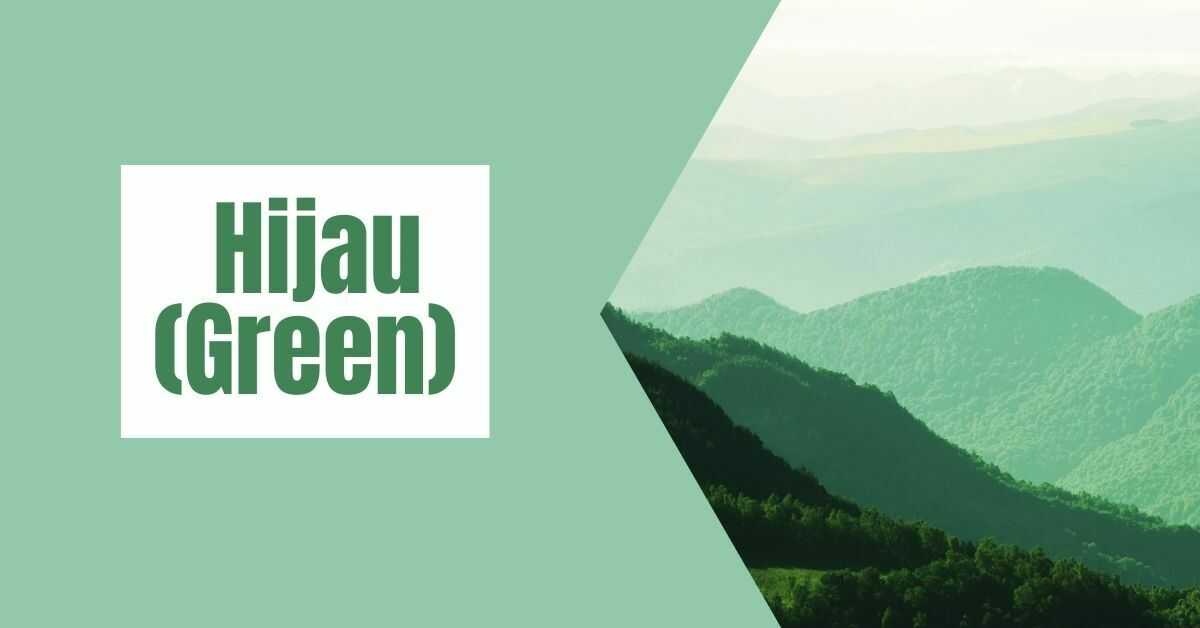 You had a headstart on this one, as I just mentioned before. In Bahasa Melayu, green translates to hijau. Warna hijau, in general, provides the sentiment of nature, calmness, relaxation, and peace. Wondering where you can find this peaceful, calm green in Malaysia?

There you go - we have a very scenic park called Taman Saujana Hijau, Putrajaya - and the name says it all. This park is popular among the locals for its natural tranquillity. It's a hotspot for picnics and morning walks. Below the park is the scenery of a tea plantation in Cameron Highland. This one has been a famous local and tourist spot even when I wasn't yet born - it's that good.

Now, make your way to the photo on the right - yup, devour your eyes on that coral green water, which we have here in Rawa Island, Johor. 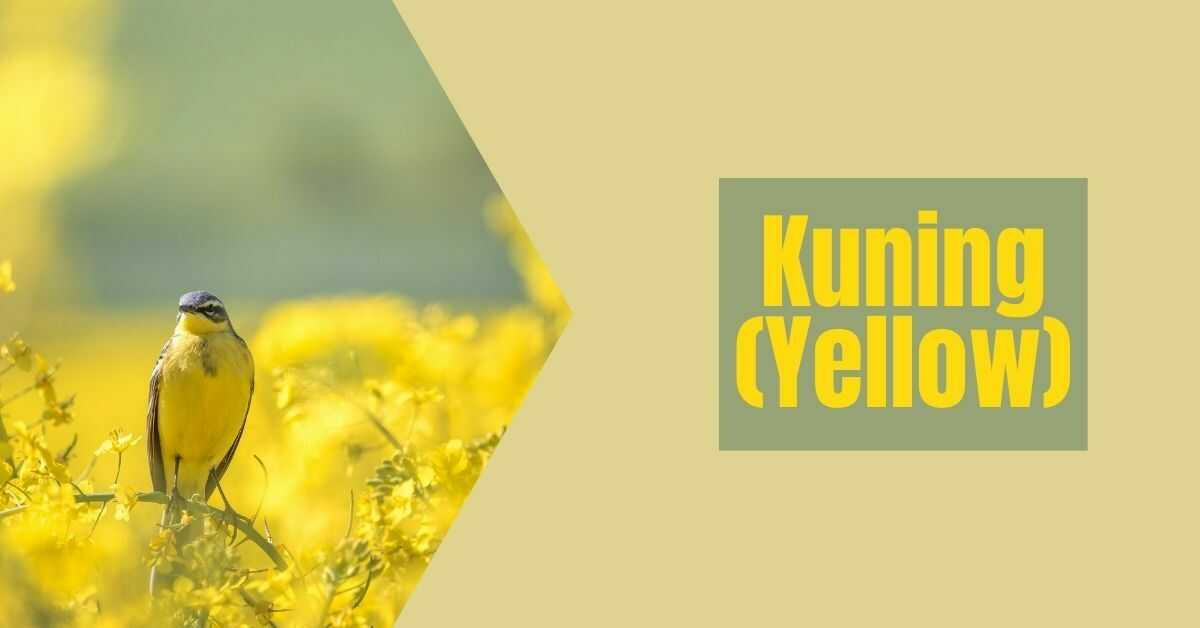 How do you say yellow in the Malay language? It's kuning! Yellow color is quite significant too in the Malay culture. Apart from being one of the colors in Jalur Gemilang (which represents the King's sovereignty), kuning also symbolizes royalty. Try asking any local Malay - what does yellow represent in Malaysia? You will most likely get 'royalty' as an answer.

For your information, warna kuning is commonly associated with Malay royalty, ranging from the King, Queen, Princes, as well as Princesses. You can witness how the National Palace in Malaysia is bright yellow during any high prestigious formal ceremonies like a coronation ceremony. 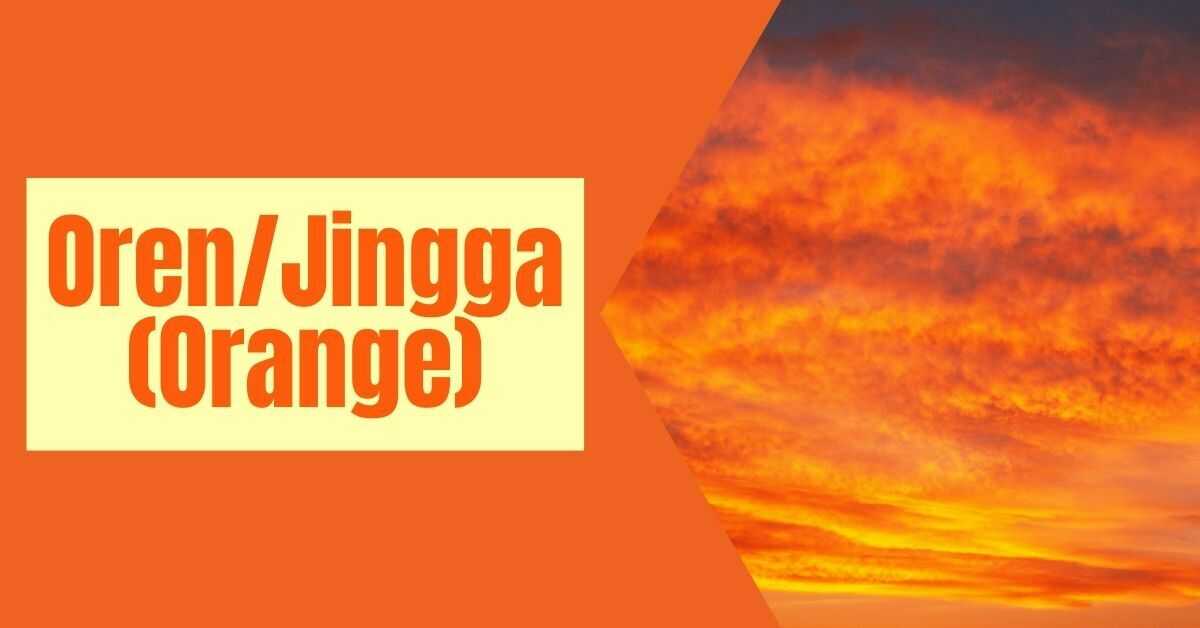 Orange in Malay is sometimes articulated as oren. Similar to its English context, oren has two meanings; warna oren (orange color) and buah oren (orange fruit). However, the word oren is mainly used casually if you're talking about color. A more formal word for orange color in Malay would be jingga. Jingga is mostly used in formal education or during any formal occasions.

As we all know, warna oren represents joy, creativity, enthusiasm, fun, heat, and warmth. Maybe that's why Malaysia is quite hot. 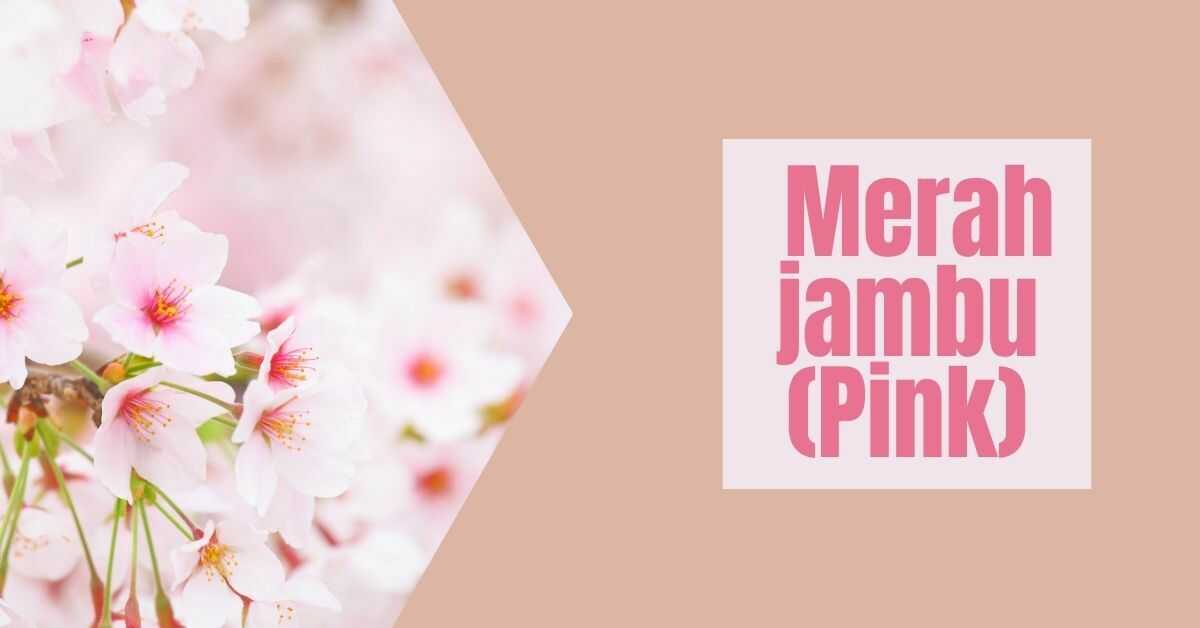 In English, it's pink. In the Malay language, it's merah jambu. We already understand the meaning of red; merah. How about jambu? In Malaysia, we have rose apples which are called jambu in Bahasa Melayu. It's also pink in color. So, in literal terms, merah jambu means the red color that looks like the rose apples. Well, that's quite a mouthful, isn't it? Simply put, it's the color of the rose apples, which are pink! What do Malay native speakers say when they refer to the brown color? Commonly, it's called warna coklat. Yup, you heard it right - we borrow the word coklat directly from the English word chocolate, brown in color. However, the proper formal word for the brown color in Malay is warna perang.

But then, in Malay spoken context, the term perang is often used to describe a lighter shade of brown, especially the one that's more onto the orange-ish side. It is very common to hear the locals mention "her hair is perang" in Malaysia. However, we never say, "your cake is so perang." Nope, the native speakers would frown upon hearing that. Perang is typically used to describe a brown-orange color. 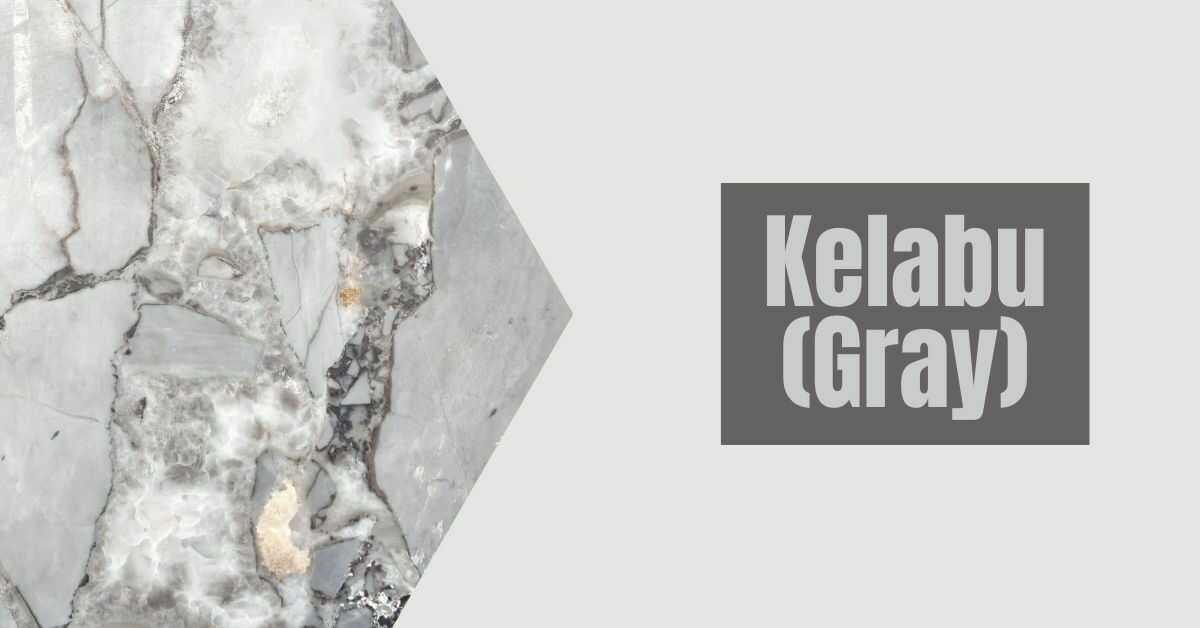 The translation of gray from English to Malay is kelabu. Warna kelabu is a color that can sometimes be emotionless and dull. But still, those who love it will deem it as formal and sophisticated. If you're tired of trying to find what purple is in Malay, it is ungu. In my country, there's a lot of food associated with ungu. My three personal favorites would be the purple sweet potato, mangosteen, and eggplant! 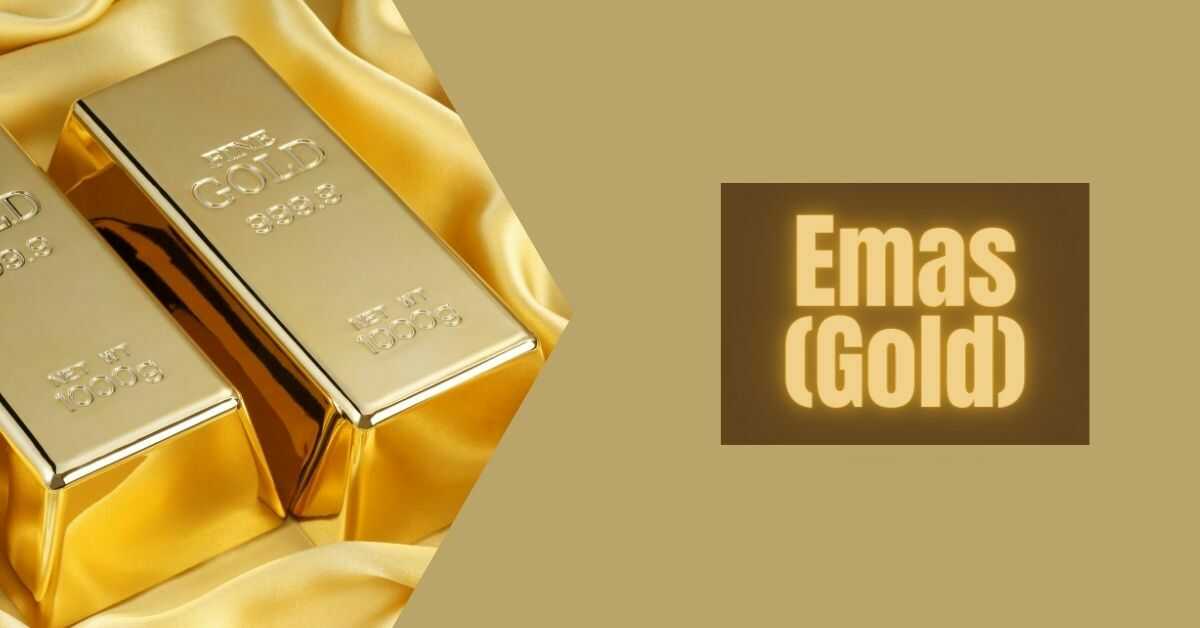 Most typical blogs won't include metallic colors - but I do. In the Malay language, gold is known as emas. It's taken from the noun emas, which literally means gold. This one is absolutely, highly raved by many women in Malaysia. Having gold pieces of jewelry can never be wrong! Silver is pronounced as perak in Malay. If you know about the states in Malaysia, you'll find that this word is also the name of one of the states, which is Perak. Bronze is pronounced as gangsa in my native language. Just so you know, these three colors; warna emas, perak, and gangsa are often used in medals. Here are common translations for the gold medal, silver medal, and bronze medal;

Other Expressions Related To Colors In Malay

How To Learn Malay?

Looking forward to learning more Malay lessons online? Go through these 10 best tips to speak Malay quickly first. It will definitely help to boost your Malay pronunciation. But if you’re trying to find other ways to learn Malay (other than your browser), Ling App is the perfect place to go. It’s a free, online language app that can teach you essential Malay grammar, words, vocabulary, pronunciation, and spelling through interactive games and quizzes. With such a fun way of learning, you’ll certainly get the hang of Bahasa Melayu in no time!

Does Ling App only teach Bahasa Malaysia? Nope, definitely not. Through Ling, you can acquire various languages including Spanish, French, German, Russian, Polish, Italian and so much more!