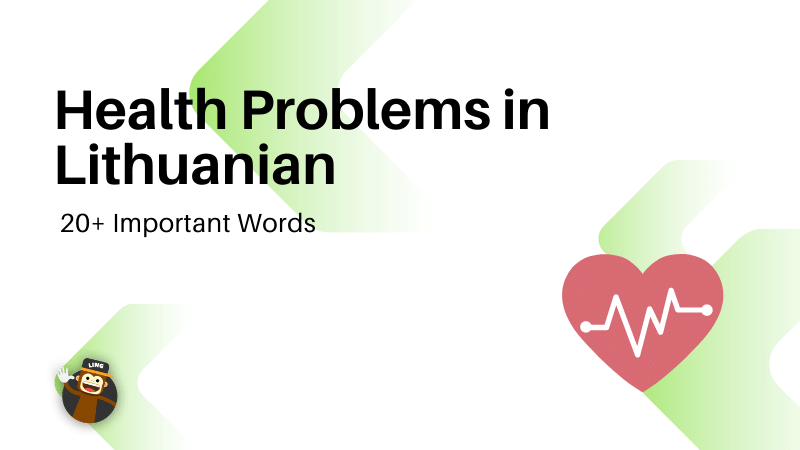 Do you know how to describe health problems in Lithuanian? Since the financial crisis, Lithuania has recovered significantly and is one of the fastest-growing economies in the EU. The country prides itself on being one of the safest places in Europe, and many insist that Lithuania is a country that offers low crime rates, affordable healthcare, and safe and quiet city life.

Even with such impressive progress in recent years, finding adequate treatments and solutions for Lithuania's top diseases sometimes remains a challenge. Lithuanians face similar health risks with their neighbors in the same region and much so with many other parts of the world. If you are interested in learning more about health problems in Lithuania, this blog is the place to be.

As a result of a universally compulsory health insurance program, Lithuanians are covered for a wide range of services. The state contributes to the National Health Insurance Fund so that the unemployed and economically inactive population groups are covered by public health insurance. Even if they do not earn an income, economically inactive people still have to pay contributions. This results in a coverage gap. However, reliable statistics are lacking. Around 8% of the population is estimated not to contribute to health insurance. In spite of this, a substantial share of them may live in other EU countries and be insured there.

According to the Institute for Health Metrics and Evaluation, a mixture of metabolic risks, and occupational, environmental, and behavioral risks, are major causes of health problems in Lithuania. They are mostly caused by the lack of physical activity, over-consumption of alcohol, lack of sleep, lack of proper exercise, poor nutrition, bad habits, obesity, and the lack of awareness about the importance of health care.

The Most Dangerous Health Problems In Lithuanian

Listed below, you'll find the most commonly occurring health issues in Lithuania, according to the Institute for Health Metrics and Evaluation.

According to the World Health Organization (WHO), the top killer in Lithuania in the year 2014 was coronary heart disease which constituted 29,363 deaths that year. Ischemic heart disease is one of the most common heart diseases in the world. Ischemia is a condition in which blood is unable to flow to the heart efficiently, causing tissue damage and often resulting in a heart attack.

A stroke, simply put, is when blood flow to the brain is cut off, which causes brain damage. It is a type of vascular problem that is caused by a large blood vessel suddenly or rapidly breaking, and therefore it will cause a local interruption in the blood supply.

According to the National Institute of Neurological Disorders and Stroke (NINDS), Alzheimer's disease (AD) is a disease in which the brain gradually loses its ability to store memories and other information. Alzheimer's disease is one of the most dangerous and fatal diseases that can be transferred to the body of the patient.

In its most basic definition, lung cancer is a malignant tumor that originates from the lining of the respiratory tract. Lung cancer is now the third leading cause of death in Lithuania, as a legacy of high smoking rates.

The word "cirrhosis" is the formation of scar tissues in the liver. When this happens, the liver will not be able to function normally. In some cases, cirrhosis may be, and is, fatal.

The total number of respiratory (or viral) infections in Lithuania has increased over the last decade, with the most dramatic increase occurring among children. The overwhelming majority of these cases are not associated with a specific virus. Instead, they are caused by a variety of bacteria, viruses, and fungi.

In Lithuania, diabetes affects more than 120,000 people, making it one of the country's foremost health issues. Funds for insulin treatment have constantly been decreasing as a result of various cost-containment measures.

Other Common Diseases In Lithuanian

As we approach this section of the post, we are going to list some more common, everyday health problems and health-related words that are common in Lithuanian.

If you are into learning the Lithuanian language but don't want to attend a full-time language course, you should definitely learn more about the Ling App.

The Ling App by Simya Solutions is a fantastic language learning app that offers interactive lessons for more than 60 languages! You can master your language skills by using the Ling App for as little as 10 minutes a day. Thanks to its interactive features and the gamified environment, you can learn in a fun and practical way. The best of all is that you can try it for free! Download it now and discover why it is one of the featured apps today! Check out our previous posts about the Lithuanian language, Colors In Lithuanian and Lithuanian Numbers