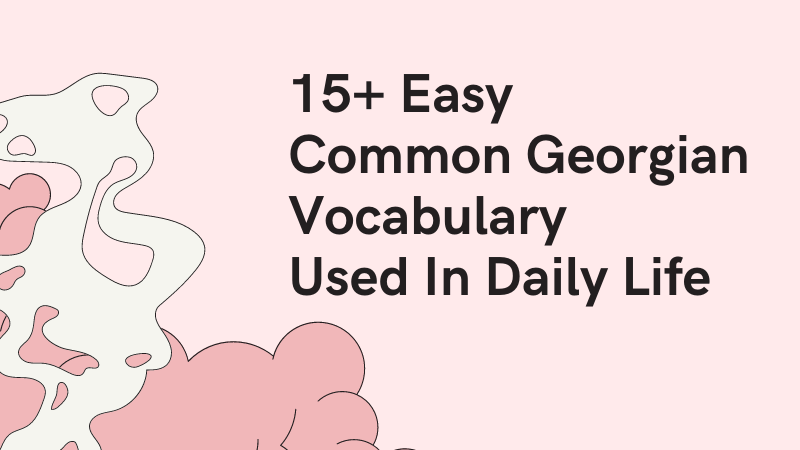 Are you interested in impressing the locals? Learn more about the common Georgian vocabulary used in everyday life in today’s blog post! If you are ready to find the best words to use, continue reading below! At the end of the day, having the ability to blurt out certain words can seriously help you in navigating life or simply traveling in a Georgian-speaking country.

The official language of Georgia is Georgian or ქართული ენა (kartuli ena). Other countries influenced some of the words and phrases used in Georgia today. One of those languages which affected the Georgian language used today is English. In fact, some Georgians speak English words as well in day-to-day conversations. Aside from the language, the culture from other neighboring countries is adopted, such as the family traditions, dating culture, foods, and cooking ingredients.

If you are a visitor to this country, you may encounter different locals speaking common Georgian words, expressions (non-verbal communication), and even proverbs. Some of you may hear it spoken at local markets, churches, and on the street. That’s why, if you want to sound like a local, you need to understand and learn common and vital words that are used in Georgia.

Now that you are familiar with some of the basics of Georgian grammar (common Georgian vocabulary), you may want to visit and read other related blog posts to help you, such as Top 10 Delicious Georgian Foods, Funny Georgian Phrases, and most importantly, the Georgian Alphabet for you to improve in this language. Want to explore and discover more about Georgia and Georgian Language? Download Ling App by Simya Solutions.

Ling app is a language learning application that can help you achieve your language goals. This app offers 60+ different languages, including minority languages.

Moreover, the Ling app is a user-friendly and hassle-free language learning application that you can use anytime and anywhere. It can help you to learn a language innovatively if you are a person who wants to travel to different countries in the world. You don’t need to buy travel brochures and dictionaries with translations (which are a hassle and heavy to carry big and heavy to carry). Also, learning languages in this app is not boring because you can engagingly know them.

Using the Ling app will engage you in playing interactive games to be familiar and memorize common words of your target language. Furthermore, you can read and explore more about your second language because they provide informative and educational blog posts every day.

Download and discover a fun way of learning a new language with the Ling App now!