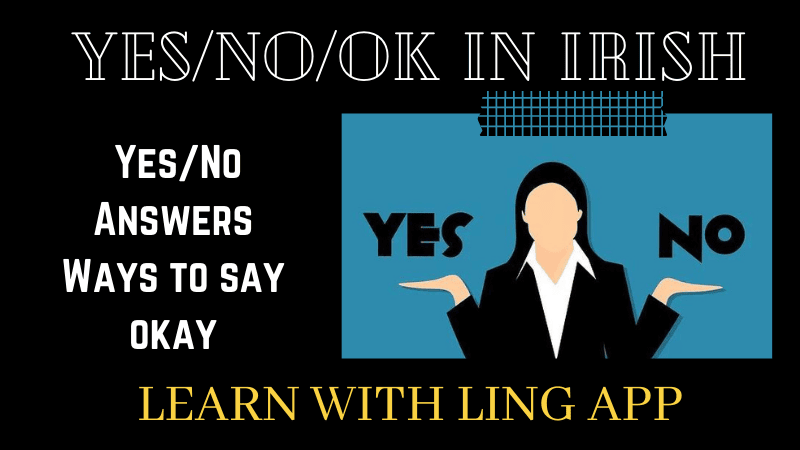 Dia Duit! Are you aware of responding to Irish questions or statements using simple words like yes/no and ok in Irish? If not, then this blog is for you. Today, we will walk you through some creative ways which you can use in your everyday life and avoid the problem of being redundant. So, let's start learning the three primary responses in the sections below!

There are various ways of answering questions in Irish, and most of the questions in Irish require yes and no answers. You can also answer questions by giving out specific details, which should also be followed by the word suggesting "yes/no" in Irish.

However, there is a catch since the Irish language is one of the only languages which do not have any words for yes and no. You can get an affirmative or negative answer in Irish, but there are no exact words in spoken Irish. In this blog post, we will teach you how to crack that, along with many examples.

The most formal way to say okay in Ireland is by saying "ceart go leor." This could sound a bit formal, but using this phrase will always be helpful if you can't remember any other way of saying Okay in Irish Gaelic. You can use it with any Irish pronoun.

An American or a person who speaks English might get confused about other ways of saying yes, e.g., repeating verbs, and therefore they are initially taught these only. While explaining the vocabulary rules in this language, it is okay to use these words. Their usage is generally seen both in spoken Irish and while translating the English language to the Irish language.

This can be a good response if the questions asked are direct. Here are some of the questions which can be answered in the negative or positive form by using these two words:

Note: You should only use these two words if you cannot use any other ways for answering questions in Gaelic/Irish. The person you talk to might stop asking anything because they would automatically assume that you don't want to talk to them. In Gaelic/Irish, such responses would be considered bland and rude.

To avoid such terrible mishaps from happening, let's learn some more ways of saying yes and no in Gaelic/Irish.

Another excellent and commonly used method by native Irish speakers is repeating the main verb in a sentence. The experience of speaking Irish can be extremely different from speaking English because of these differences in linguistic technicalities. Following are some sentences with an example for each question verb tricks for answering in negative and positive form.

Now that we have learned how to say yes, no, and okay in the Irish language, let's also know how to form sentences using these words. The sentences in Gaelic/Irish use the same VSO word order.

In the examples provided above, the first type of question was "An+ Verb." It is essential to acknowledge that the questions start with the "are" or "is" verb in the first type. For such questions (with the "are or is" verb), the best approach is to start the sentence with the same verb present in the question. It is essential to keep the context in mind.

When a question starts with "An," feel free to use "Tá" in the starting to indicate that you positively affirm the certain question being asked.

In this example, did you notice how the verb "Tá" is repeated instead of using the other word, "sea" which is also used to say yes in Irish? For example, "An bhfuil tú ag dul?" (Are you going?) could be answered as "Tá, tá mé ag dul" (Yes, I am going).

The abovementioned examples also have the questions with the verb "ar." Such questions usually are in the past simple past perfect tense. The sentence structure for this tense will stay the same. However, the word for a verb will change.

For instance, a response to "Ar ith tú?" (Have you eaten?) could be "Tá, tá mé ith" (Yes, I have eaten). And to nullify the statement made in the question and provide a negative answer, you can say "níor" as in "Níor, níor ith mé" (No, I haven't eaten).

Another way of saying no is by using "níl" at the start of the sentence. For example, "Ar thit tú?" (Have you fallen?) could be answered as "Níl, níl mé tar éis titim" (No, I haven't fallen).

All the questions using the "is it" form can be answered using the "it is" form of the verb.

Other Ways To Say Okay In Irish

There are several expressions and slang for saying Okay in Irish. Let's dive into that! Let's talk about some of the easiest ways of saying okay in Irish.

In Ireland, the most common slang for okay in local dialect is grand. This is a loan word from the Plain English language. This word has an English origin, but the meaning is different from how it is used in America or any other English-speaking country. It is not used for greetings or telling something is great.

In Ireland, Grand is a subtle way of saying "okay." Many people use this slang. Even the people who travel or study in Ireland pick up this slang. For example, when someone tells you "Tá rang agat inniu" (You have a class today), you can say "Grand!" (okay/fine).

There are various Irish Phrases for saying Okay in Ireland, and one of them is "Go raibh maith agat." This phrase is translated as thank you. However, most Irish people use this when someone tells them something they did not ask for but could be beneficial for them.

People often say "okay" when they get unsolicited advice in English. However, in Ireland, the people are friendly and therefore thank the other person even when they do not need or ask for advice.

For example, if someone tells you "Bí cúramach, b'fhéidir go dtitfidh tú mura mhoillíonn tú" (Be careful, you might fall if you don't slow down), you can reply with the Irish phrase "Go raibh maith agat" (thank you) instead of okay.

Another way to say okay in Gaelic/Irish is by saying "tá go breá" which means it's fine or okay. For example, if your employee is telling you about a mistake on their part and you know that the problem can be handled, you can say "tá go breá."

This is one of those phrases that can be used only on certain specific occasions. You would not see people use this phrase a lot.

Many people use the exclamation "óicé" to say okay. This is a casual way of responding to any situation. Using "óicé" implies that either the person you are having the conversation with is close to you, or the entire situation is calm.

For instance, if someone tells you "Thug sé bia leat" (He brought you food), you can reply with "óicé!".

The all-time favorite and the easy peasy phrase is "Ok." This expression is probably one of those expressions which are universally intelligible and used. This word would never disappoint you in Ireland since most Irish speakers use "ok" when they want to say "okay." There are no conditions for this word, and it can be generally used for all situations and occasions.

I hope by now you are aware of all the ways to say yes/okay and no in Irish. For Irish learners, Irish can be a complex language since most language learning sources do not offer this language. If you struggle to find good options for learning Irish, then Ling App by Simya Solutions can be a great place to start. On Ling App, we have many blogs which can provide you with a head start to learn Irish. We also have blog posts about Date And Time In Irish and Easy Relationship Vocabulary In Irish. Are you looking for more information? Click this!