Ah, grammar. The tedious yet essential skill to learning any new language, especially learning Dutch. Each language has its particular way of organizing parts of speech in a sentence, and Dutch is no different. You’ll need to know where the subject, verb, or adjective goes in a sentence to communicate effectively.

It can be a bit of a head-scratcher learning Dutch sentence structure, but once we show you some Dutch word order within sentences, it will make much more sense.

If you’re an English language learner, know that Dutch word order is very similar to that of English because word order changes around a lot depending on intended meaning and context.

This guide to Dutch sentence structure will cover statements (declarative, commands, imperatives) and how to form questions.

When looking at the main clause (a statement or independent clause), this is the general Dutch sentence structure:

However, time, manner, and place adverbs will move accordingly to the purpose of your statement. Also, not every sentence will need so many parts! Some sentences are simple and compound, while others are complex.

Constructing A Basic Sentence In Dutch

It’s possible to form a sentence in Dutch using only a subject and a verb. Let’s see some examples:

In the above examples, the objects were direct, meaning something was being directly done to them. You can also use indirect objects in a sentence like this:

Like in English, adjectives are used to describe nouns (people, places, and things). In English sentence structure, the adjective goes before the noun. Thankfully the Dutch follow the same rule for most Dutch adjectives:

As you can see in these examples, the adjective goes immediately before the noun.

What happens when you add two adverbs into a Dutch sentence? What happens to the word order in Dutch?

In Dutch, the last two words are the adverbs – altijd veel. Both go after the verb. Let’s see another example:

Snel and vaak are the adverbs after the verb.

What Happens When An Adverb Modifies An Adjective Or Another Adverb?

The modifying adverb comes after the verb and before the adverb or adjective when this occurs.

How To Add Adverbs Of Time, Manner, And Place To Dutch Sentences

Forming An Imperative Command In Dutch

Moving on from declarative statements, let’s look at imperative sentence structures. Imperatives are commands such as, ‘Go to your room!’ or ‘Clean up, now!’

The English sentence structure for an imperative usually begins with a verb or a subject. In Dutch, their commands begin with a verb.

Let’s see a few different examples of commands in Dutch:

The common question words in Dutch are:

Like in English, the Dutch word order for questions is that the question words go at the beginning of question sentences. The Dutch sentence structure for sentences is:

Okay, that was a lot to take in, but learning a language does take dedication. Be sure to bookmark this page so you can learn to read and speak Dutch more fluently.

Our blog is a great resource to learn in-depth information such as how to introduce yourself or how to greet in Dutch. But if you’re looking for a quicker way to learn Dutch, check out Ling Language App. It offers the world in your pocket. With Ling, you’ll easily pick up a new language in about 15 minutes a day through fun activities, quizzes, listening to real native conversations, and more!

Choose from over 60 languages with Ling. Start learning today!

And if you need an extra resource, we suggest you take the free 25-min Dutch course by Ramon Janssen that will build the bases you need to improve your Dutch skills. It is ideal for beginners who are unfamiliar with the language and need to learn at their own pace. Try it out! 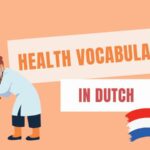 Your #1 Comprehensive Guide To Health Vocabulary In Dutch 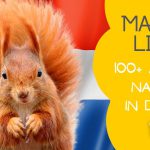 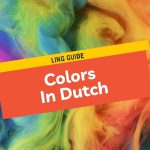 Colors In Dutch: The #1 Easy Guide For Beginners 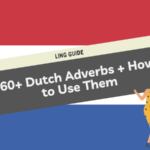 A Comprehensive Guide To Dutch Adverbs With 60+ Examples