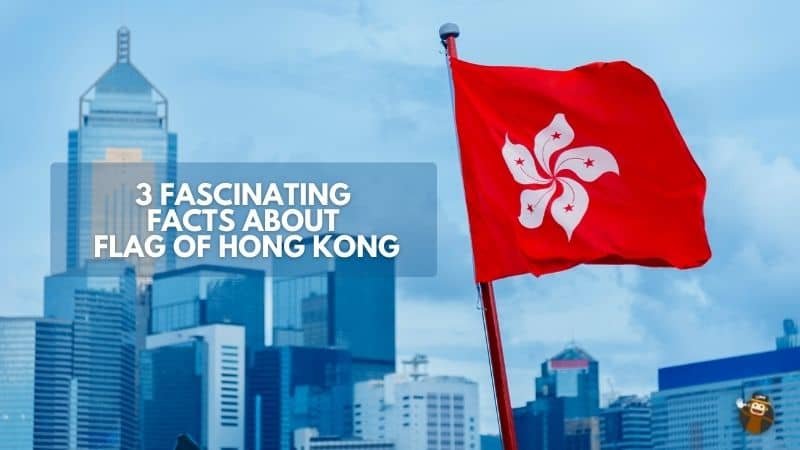 Can you imagine how weird it must be if each country will not have its own national flag (or 旗 – kei4 in Cantonese)? Fortunately, that is not the case in today’s world. In fact, all the flags now carry some symbolic meaning. In line with that, we will unlock astonishing facts about the flag of Hong Kong.

A national flag symbolizes a nation’s pride, identity, and patriotism. It is a positive confirmation of devotion and dedication. It identifies a country that believes in. Its design and colors represent countries in various ways, identifying their values, beliefs, and history. It may have been initially simple decorations or perhaps ceremonial images during ancient history. But this had evolved entirely through time.

Flags become essential and symbolic. Leaders, communities, gods, commerce, artisan guilds, ships, and towns were all represented by flags. A flag was frequently treated with the same reverence as the person or thing it signified. Even in battles, the loss of a flag was a devastating blow. Capturing an opponent’s flag could be the game’s deciding factor. Religious symbols were also frequently depicted on flags and flown at religious and state events.

At present, a national flag usually represents a country’s unchangeable qualities. The geographical location, or possibly a distinguishing physical feature, historical foundation, or (to a lesser extent) the constitutional system are examples. Today, we will learn about the regional flag of Hong Kong.

Hong Kong’s flag has a stylized five-petaled white orchid against a red background. Since 1997, it has served as Hong Kong’s official flag, signifying the city’s reunification with China under the principle of “one country, two systems.”

There are different Hong Kong flags used: the pre-colonial flag, colonial flags, and flags used by government departments. During the Japanese colonization of Hong Kong, they forcibly introduced Japanese lifestyles in, eradicating many parts of Chinese and British culture. During this time, the identity of Hong Kong was suppressed, and all British and Chinese flags were banned; propaganda posters were issued proclaiming the Japanese flag to be Hong Kong’s national flag.

Before adopting the current flag, Hong Kong’s colonial flag was a ‘Blue Ensign’ flag, which featured Hong Kong’s coat of arms on a white disk on the outer part of the blue Union Jack ensign. The flag was used between 1959 and 1997. Two Chinese junks, a nautical crown, and a lion holding a pearl were featured in the design, alluding to Hong Kong’s nickname “Pearl of the Orient.”

Between 1987 and 1988, before the handover of sovereignty from the United Kingdom to the People’s Republic of China (PRC), a competition was held in the Chinese city to design a new flag for post-colonial Hong Kong. Residents of the city submitted almost 4,000 drawings; however, none were accepted by the PRC government. Instead, they invited renowned architect Tao Ho, one of the panel’s assessors, to pick Hong Kong’s new flag.

The flag of Hong Kong has an interesting inspiration. Ho entered a garden in search of inspiration and took a bauhinia flower. He saw the five petals’ symmetry and how their twisting arrangement gave off a vibrant vibe. Finally, he reflected this vitality into the flag to represent Hong Kong. This became the post-colonial Hong Kong SAR flag.

On February 16, 1990, Hong Kong’s flag was officially adopted. The Preparatory Committee, a panel that advised the People’s Republic of China, gave it formal approval on August 10, 1996. (PRC). On July 1, 1997, it was officially hoisted during Hong Kong’s handover ceremony.

All About Hong Kong’s National Flag

Hong Kong’s flag might look simple, but all of its elements have meanings. Every part of Hong Kong symbolizes the identity and values of Hong Kongers; that’s why it is governed by laws passed. The flag’s design is entrenched in Hong Kong’s Basic Law, the territory’s constitutional document. The Regional Flag and Regional Emblem Ordinance specify the flag’s use, use ban, flag desecration, and flag fabrication.

The Hong Kong government has established the flag’s dimensions, colors, and production requirements. In this part of the blog, we will learn more about every part of Hong Kong’s flag.

I. Design And Symbolism

The current flag of Hong Kong features a bright red background with a circular arrangement of white flower petals. This contemporary design was adopted by the Fourth Plenum of the Hong Kong Special Administrative Region’s Preparatory Committee on August 10, 1996, and it is currently used until now.

The Chinese flag represents the motherland. As we all know, red is a joyful color in China. It is used in many important celebrations, and it is also used to express nationalism and festivity. The red background added to the Hong Kong flag came from the motherland, represented by the Chinese flag. The inclusion of the color red in the flag of Hong Kong is used to symbolize the connection between Mainland China and Hong Kong.

The emblematic flower of the flag of Hong Kong was from the Bauhinia blakeana (紫荊 zi2 ging1), often known as the Hong Kong Orchid Tree. The fragrant, violet flowers are grown across the city and bloom from November to late March. The flower is depicted in white on the flag as a symbol of peace and harmony. There is also a statue of this plant in the Golden Bauhinia Square that you might want to visit in Hong Kong.

The flag of Hong Kong also has a five-pointed star in each of the flower’s petals. The five-pointed red star is a replica of the five stars Chinese national flag and a symbol of the ruling Communist Party. The five stars on the flower also represent the Hong Kong compatriots’ love they have for their homeland.

The flag of Hong Kong has specified sizes, colors, and manufacturing parameters, and here are the things that you need to remember:

The flag is treated with great respect considering what it symbolizes. Even if it’s not your country’s flag, you should show your respect as if it is your own. The precise use of the flag is governed by legislation established by the State Council’s 58th executive meeting in Beijing. Here are some protocols regarding the flag of Hong Kong.

Raising And Lowering Of The Flag

Aside from the pre-colonial, colonial, and post-colonial flag of Hong that you saw, there is also another flag of Hong Kong that is used in protests against the Chinese government.

Twenty-two years after it was initially flown, the flag and flower emblem has been targeted by pro-democracy demonstrators. Last July 1, 2019, demonstrators hoisted an upside-down Hong Kong flag at a ceremony marking the territory’s transfer to China. The Chinese national flag and an ominous black version were flown at half-staff in sorrow.

The Lennon Wall Flag, a symbol of Hong Kong’s pro-democracy movement, was designed by the Chinese cartoonist and political activist Badiucao. According to Badiucao, the flag was directly inspired by Hong Kong’s Lennon Wall. It comprises 96 colored squares organized in an eight by 12 grid to represent the post-it notes on the walls. He asserts, “Each color on the flag represents a distinct voice. And every voice deserves a home in Hong Kong.” The number 96 denotes 1996, the year preceding Hong Kong’s transfer of sovereignty.

Learn More Than Just The Flag Of Hong Kong!

The Hong Kong flag symbolizes the nation’s pride and patriotism, but the country’s national language is essential. Language also serves as an identity of the country and its people. Without one language, it’s hard to bind people together. So, after learning about the flag of Hong Kong, you must now try to learn the Cantonese language too.

But where to begin? Luckily, Ling App can give you a fun and extensive language learning experience. With fun activities and well-developed lessons, you can improve your language skills in record time. Another inters=esting is you can learn anytime and anywhere you want because you can simply download the app or go to the website.