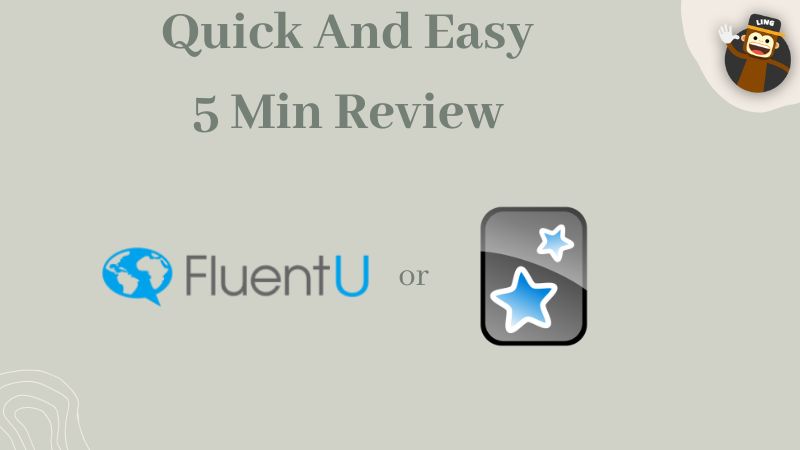 I don't know about you, but the language learning market is a scary place to consider if you're careful with your cash. The field has become completely oversaturated, especially since the pandemic sent everybody indoors and out of classrooms. That's why Ling is forever trying to untangle the mess and bring some order to things by doing reviews such as FluentU Vs. Anki.

This review will cover an 'about' section, pricing, pros and cons, as well as a final verdict on what app we think you should go with.

Whatever your target language, language learning apps are great for native speakers learning a foreign language. Language apps are particularly useful for learning new vocabulary words and improving listening skills. I would argue that for speaking practice, the best thing to do is hire a native teacher.

The language learning scene is chock full of apps for learning languages. The two today are Anki and FluentU.

Let's dive in for a closer look.

FluentU is very much a video platform. In recent years it has tried to incorporate other elements like flashcards; however, people largely use it to get high-quality videos with subtitles to practice their listening and reading.

One word: flashcards. Anki is the premier app for creating high-quality flashcards. For this reason, perhaps it is slightly disingenuous to call it a language learning app.

Anki uses the spaced repetition process to improve your active recall of new vocabulary. The app was released in 2006, and at the time, it was state-of-the-art software utilized by professionals. It came to my attention in a 2015 survey of students in Washington. 31% of students used Anki and showed that those students performed better on the unit's final test.

Whatever language you speak and want to create flashcards in. There is a community tab, and these pre-made flashcards tend to be in more dominant languages like English, Spanish, and Mandarin.

FluentU Vs. Anki. Which One Should You Choose?

Comparing FluentU and Anki is a little bit like comparing cats and dogs.

FluentU is for those of you who learn best visually. We can't deny that watching videos is much less taxing than studying grammar guides. However, I would argue that they've fallen a little in love with their unique selling point(recent updates suggest they're moving away from being a video-based platform only).

Perhaps it is wrong to compare FluentU with Anki and instead contrast it with the likes of Pimsleur. When we do this, it quickly becomes apparent that it isn't a match for this similar-priced competitor. In fact, I think less expensive apps like Ling and Duolingo are even superior.

Anki, in my opinion, is awesome. However, it is best suited to serious language learners. Apps like Duolingo involve a certain amount of handholding. They will constantly encourage you to sign in to the app and study some basic vocabulary. The user interface is also very beautiful and barely feels like you're studying.

Anki is the opposite. To use an exercise metaphor, Duolingo is a walk in the park, and Anki is a grueling 50km marathon. It is not good to look at, but if you persevere, you realize that that shouldn't matter because you're learning at a greater rate than you would with an app that was just merely beautiful.

If you're determined to use FluentU, then I'd recommend using Anki as a supplementary aid for advanced learners. You could take the vocabulary you learn in the video and make flashcards. However, consistency is key. You need to be self-motivated to sign in every day, even if it is just for 10 minutes.

Now that we've thoroughly reviewed both apps let me tell you about an even better alternative: Ling. Since 2017 Ling has been making waves in the language learning field.

Ling is probably the most well-rounded app on the market. You can practice reading, writing, speaking, listening, and grammar with Ling.

If I had to identify one key feature that sets Ling apart, I'd say it was the sheer amount of lesser-spoken languages on the platform. There are 60 in total, and Ling stays away from the giants like french and English(there are courses, but they're not very heavily marketed) and concentrates on the likes of Khmer, Thai, and Lao.

Don't forget that this blog is updated weekly. If this review wasn't enough to convince you to part with your hard-earned cash, why not check out some others reviewing language learning apps with language courses such as LingQ vs. Anki and Anki vs. Memrise.