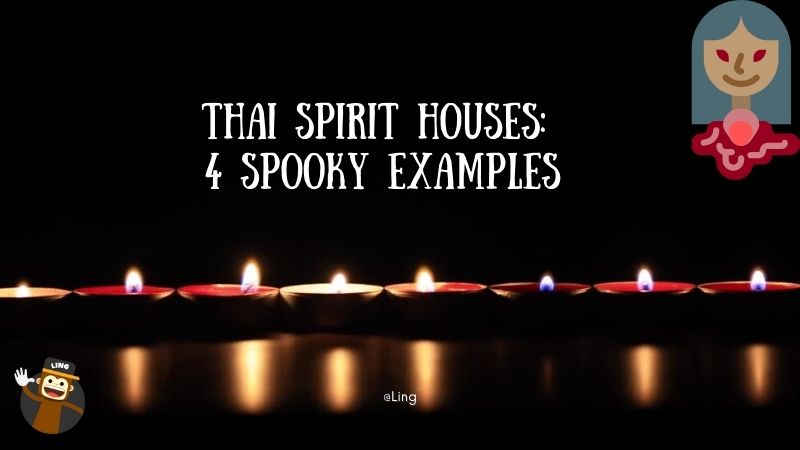 The first time I went to Thailand, I’d already spent several years in Vietnam and was particularly attuned to the differences. The most obvious was that Thai people seemed far more religious, and the countless opulent Buddhist temples were evidence of this. However, along with the giant gold statues, there were miniature houses, and they didn’t always have to be within a temple complex. Often you’d see them on road junctions and outside space-age shopping malls. After some inquiry, I discovered they were known as Thai spirit houses (san phra phum) ศาลพระภูมิ – and there was a fascinating story behind them.

Before we get into the article, I want to make a quick detour and tell you about Ling. Ling is the language app that provides Thai lessons in neat, 15 min bite-sized chunks. Ling is doing what Duolingo did for English but focusing on lesser-spoken languages. We believe Thai is a beautiful language that deserves its day in the sun.

The first thing to say is that spirit houses are found in many Southeast Asian countries, although in my experience, they are far more common in Thailand and Laos.

The concept of a spirit house derives from a combination of Buddhism, animism, and other folk beliefs. It isn’t easy to pin down exactly where one ends, and the other begins.

Their principal purpose is to house spirits or (phi) that Thai people believe are all around us. These can be both evil spirits and benevolent spirits. Offerings are made to spirit houses to protect against misfortune. If spirits take up home in one of these houses, then they are less likely to come into your actual house!

It is often these offerings that confuse foreigners visiting Thailand. It is not uncommon to see a cigarette or a full bottle of Red energy drink outside. Red symbolizes blood, as in the past, an animal sacrifice would be made.

The reason for cigarettes is probably because the spirits are similar to us and who doesn’t want a smoke even if you find yourself in the spirit world?! Other offerings include fresh flowers and fresh fruit.

Thai believe in all kinds of spirits, both good and bad. Offerings to dangerous spirits appease them, while offerings to good spirits protect you and your family.

Most often, they look like a miniature house, although many different kinds exist. They are not supposed to be photographed which is why there are no photos of spirit houses in this article. It’s best just to imagine a miniature traditional Thai home.

What Animals Are Inside A Spirit House?

Different animals have different meanings. Elephants represent good fortune while traveling. You might even see a zebra, which is directly linked to a zebra crossing- an offering that might boost nearby road safety.

It is also common to see broken figurines in a spirit house because throwing away even defective objects could anger the guardian spirits.

Where Are Spirt Houses Located?

The first consideration is location. A brahman priest is consulted to ensure they are situated in the best location. This is often beside a banyan tree, which is considered sacred in Thai culture.

The banyan, or sacred fig, is revered because it is the tree under which the Buddha sat when he gained enlightenment. It is seen as bad luck if a banyan is ever cut down, so this is avoided at all costs; however, if necessary, a special ceremony takes place to appease the spirits that dwell within its trunk.

Older spirit houses were made of wood, but newer houses are sometimes made of metal and concrete.

What Spirits/Ghosts Do Thai People Believe In?

Spirit worship and general belief in ghosts are common in Thailand, even among younger people who you might have thought had shaken off the belief.

We’ll take a look at a few of my favorites now:

Not to be confused with the Nang Tani who resides in the banana tree.

Nang Ta-Khian is a female ghost who resides in the ta-khian tree. She is depicted as a beautiful young woman wearing a traditional red-brown Thai dress.

As you’d expect from a ghost that resides in the ta-khian tree, she hates it when people chop them down, and you can be guaranteed to be paid a visit from her if you use that wood to build your house. However, there is a loophole to this, a Buddhist monk is seen as worthy enough to use the wood and counteract any negative energy.

Note: You’ll often see certain trees wrapped in satin… This is done when someone believes they’ve identified the actual tree that the spirit resides in

This is a spirit that comes with a specific story. (You might recognize it as it’s been made into different movies over the years).

A young man goes off to war, leaving his pregnant wife. His wife dies during childbirth, which in Thailand generally means that the woman then becomes a ghost.

The husband doesn’t know of his wife’s death and returns from war to the house, where he finds his wife as if nothing has happened.

One day one of the neighbors visits and, in horror, tells the husband that he’s living with a dead woman, which, needless to say, freaks the husband out.

The husband flees, and the mae nak is furious. She terrorizes the local town, and the only person that can calm her down is a revered monk.

He takes her essence, which resides in a bone on her forehead, and clips it to his belt.

If you go to Klong Phra Khanong, at Wat Mahabut, you will see women making offerings to her shrine in the hope of an easy childbirth or successful marriage(particularly if their husband is in the army).

Now that you’ve learned a little about the concept of a Thailand spirit house, it might be time to level up your Thai.

If you liked this blog, think about checking out some others such as Thai vs. Vietnamese and The Thai Royal Family.