Swahili Numbers And Counting: Your #1 Easy Guide To Count From 1 - 100 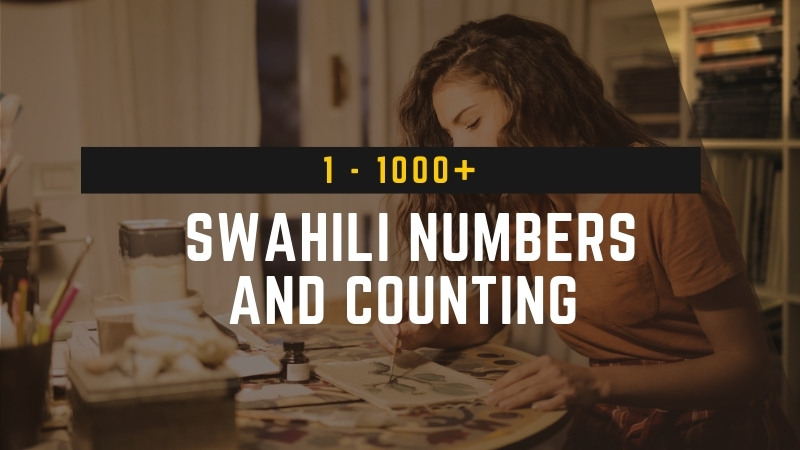 Imagine yourself in the busy market of Kenya or Tanzania, and you just found this beautiful bag you wanted to get. In the process of saying hello and asking how much, you realize that your daughter will be sad if you don't get her a bag as well, and your cousin who will be traveling tomorrow will also appreciate a bag as a farewell gift. Realizing this, the seller asks Ni mangapi? (How many?) and that is when you can't stop saying 'umm' or relying on your fingers to do the job. You wish you knew the basic Swahili numbers and counting terms at that moment.

How It Really Works

If you paid attention to the one to twenty cardinal numbers, you might have noticed a pattern from the number eleven downwards. In Swahili, all you need to know is the number one to ten, and counting to a hundred will be much easier.

Arobaini stands for the number 40 (forty), while Sita is the number five (5).

Once you understand these basic rules, counting from eleven to a hundred will be a walk in the park. Continue reading, and you will notice a similar pattern from twenty to a hundred. You can go ahead and try out more examples on your own.

Other Rules To Keep In Mind

Another type of number you should know is the ordinal number. They are great for signifying positions, dates, and the order of something. Here are some ordinal numbers in Swahili.

How To Count Other Numbers In Swahili

When counting other numbers, let's say 1234, it will be elfu moja, na mia mbili na thelathini na nne. In other words, you count the thousands, the hundreds, the tens, and the units.

Okay, let me break it down. You will agree with me that 1234 in words is one thousand, two hundred and thirty-four, right? In Swahili, you translate based on the words.

So, one thousand, two hundred and thirty-four will be:

Let's go through more examples so that you can understand better.

You can make up numbers and try. I am sure you are going to get everything right!

How Many Swahili Numbers Can You Remember?

We've come to the end of this article, and I am sure you were able to learn one or two numbers off hand. So, how many Swahili numbers do you know now? Now that you've learned a lot of Swahili numbers, you can easily go shopping, make orders or tell the date in Swahili. If you are interested in learning more of this beautiful language, you will definitely find the Ling App useful.

Ling App is a language learning platform that features a gamified experience to make learning fun and enjoyable. You get access to audio lessons, grammar lessons, intuitive quizzes, and loads of resources to go from a complete beginner to a fluent speaker in no time. The Ling App offers 60+ languages alongside Swahili, so you have plenty of options to take on other languages.

So, what are you waiting for? Download the Ling App today from Play Store and App Store.

More From The Swahili Blog