Serbs are very cheerful and friendly people. New Year Traditions in Serbia are fascinating, and we will talk about them in this blog.

Let me talk about more interesting stuff about New Year and Christmas traditions in Serbia.

The whole interesting story about the celebration of 2 Christmases starts with two calendars. This means that Serbs have two calendars:

gregorijanski kalendar ili novi (Gregorian or new calendar) which is the official one.

I hope that now it makes sense that Serbs call the new calendar “katolički” (catholic) and the old calendar “pravoslavni” (orthodox), whereas we would refer to.

I already wrote about the most common Serbian Christmas Greetings in my previous article, but we can talk about them here.

Christmas Eve Serbs call Badnje veče. It's a tradition to have badnjak (a branch of an oak tree). Also, they have Božić Bata which literally means Christmas Brother. He has the most fun part in this tradition - to leave presents under the Jelka (New Year's tree - I will explain it later) for kids to find them on Christmas morning.

In case you didn't know, most of the population in Serbia is orthodox. According to Wikipedia, 85% of the people in Serbia are orthodox by religion, and only 5% are catholic, and most are located in Vojvodina (North Serbia). So, people of both religions live together and respect each other's traditions and holidays. Also, there are many mixed marriages so the fact that people in this province celebrate 2 Christmases shouldn't surprise you.

Celebrating the departure of the old and the beginning of the new year is one of the most glamorous events of the year for Serbs. They say goodbye to the old and celebrate the New Year, hoping that it will bring them more happiness and beautiful moments. But it's also an ancient religious, social and cultural pattern in almost all parts of the world.

Many people and all the kids just love to decorate the whole house and the New Year Tree the best they can, since it's the tradition that everybody does with lots of dedication and love.

How To Say Merry Christmas And Happy New Year In Serbian According to the Serbian Orthodox tradition, on Christmas, you should say "Hristos se rodi!" (Christ is born). But if someone says the greeting first, you should respond, "Vaistinu se rodi!" (Indeed, he is born).

If you want to wish Merry Christmas on the Catholic Christmas, just say: "Srećan Božić!"

In case you were wondering how to wish a Happy New Year in Serbian, you simply say "Srećna Nova godina" (Happy New Year). You can also say, "Neka ti se ostvare sve želje u novoj godini" (May all your wishes come true in the new year).

When New Year And Christmas Holidays In Serbia Take Place? 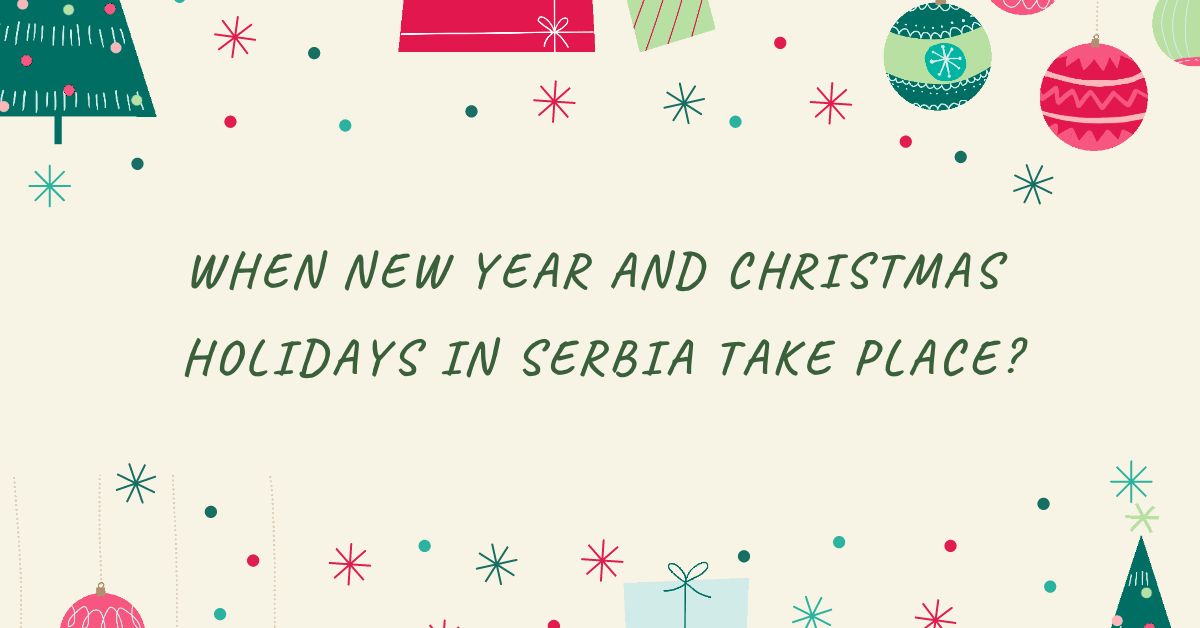 Now when you know that there is a difference between old and new calendars, let me ask you how many days one goes behind another? The answer is 13 days.
So we celebrate:
Katolički Božić (the Catholic Christmas) 25. decembra (on December 25th).
Pravoslavni Božić (the Orthodox Christmas) 7. januara (on January 7th).
New Year’s Eve 31. decembra (on December 31st).
Pravoslavna nova godina (Orthodox New Year) 13. januara (on January 13th). People also call it “Srpska nova godina” (Serbian New Year).

Why Do Serbs Celebrate Catholic New Year And Orthodox Christmas?

As I already mentioned, the majority of the population in Serbia believes in orthodox religion. So, it's not that hard to guess that the Orthodox Christmas (on January 7th) is the biggest holiday since most people celebrate it. However, here comes the funny part - every person in Serbia celebrates the New Year on December 31st.

I know this doesn't sound very clear, so let me explain.

The celebration of the New Year began to gain special significance in Serbia (SFRJ back then) after the Second World War when an attempt (by communists) was made to suppress the importance that a large part of the Christian population attached to the celebration of Christmas. That is the reason why people were focusing on the less celebrated and religiously unpopular New Year on December 31st.

That's why there is a big difference between the ways of celebrating New Year and Christmas. The first is a big party that Serbians celebrate with their friends. The second one is the religious praznik (holiday) that we traditionally spend with our family.

As you could find out reading this article, New Year and Christmas in Serbia are two different traditions. New Year is new and represents a modern way of celebrating with friends. On the other hand, Božić is a traditional and religious holiday when it's all about family and orthodox moral values.

I know that I mentioned a lot of expressions and phrases about New Year and Christmas Traditions in Serbia. However, I believe that you will be diligent and work on enriching their vocabulary. If you need some help with that, you can use one excellent language learning program - Ling App and learn Serbian words and phrases in an easy, interesting, and fun way.

This language learning app will help you learn how to have a basic conversation, transportation vocabulary, Serbian alphabet, and many more valuable things.