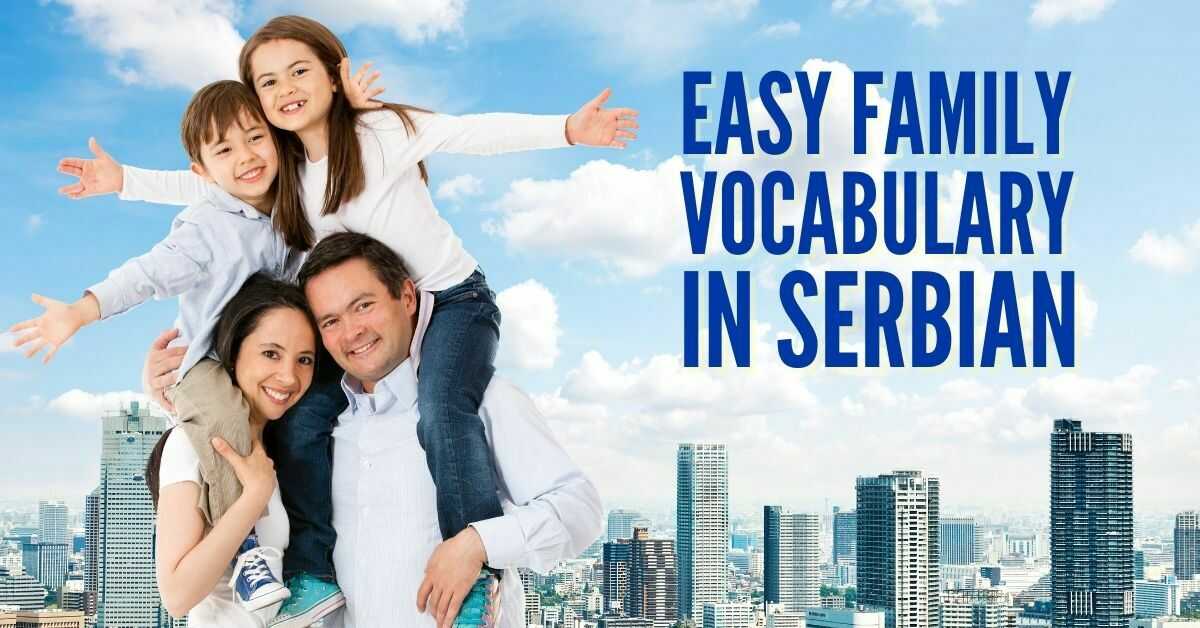 Interested to learn the basic home and family vocabulary in Serbian? In this post, we will give you a brief background on the top words to use so that you can instantly connect with the locals point out the familial relationships in a Serbian family. After all, Serbian people are a bit more complicated when it comes to naming their relatives and other important family members.

Home And Family Vocabulary In Serbian

In this section, we will give you the most common translations as well as the other unique words and slang used to describe these special members of our family. Be sure to take note of this so that you won't come off as offensive as certain words hold different meanings depending on the usage.

Serbian words for parents aren't much different than other languages. But, of course, there are some nicknames for it that are quite different too. You have to know that those nicknames could be offensive to some of the parents, but 99% of them excepted it quite well.

So both of parents are called родитељи/rodeetelhyee/ and I know it sounds strange. So mother and father, and particularly those two words in the Serbian language are named as мајка/mayka/ and отац/otatz/. So 'мајка' is for 'mother' and father is 'отац'. But mom and dad are quite the same as in some other language and it is 'mama' and 'tata'. If you want to get even more emotional with your moms and dads then you should call them 'мамица'/mameetza/ and 'татица'/tateetza/. And the last one is like in English you call for your parents mommy and daddy.

Okay, so those are some variants of naming your parents in Serbian. I think the most important one is 'mama' and 'tata' and I think it's easiest to remember also.

Now it's time to check out some slang words for moms and dads, and I already told you that you should take easy on this. You don't want to go to your father in law and call him 'ћале'. And by the way that is the slang word for your father and it is pronounced ћале/tjale/. As I said, it's not unusual for someone to call their father-in-law, or maybe some older person on the street, but that thing is not polite at all! You probably watched some Hollywood movies and you heard that someone calls some older guy 'pops'... Well, that's it, but translated to the Serbian language.

The slang word for mother is кева/keva/, and everything else I've mentioned earlier comes pretty much the same with this word also.

We have already gone through this but I will try to simplify it here so it could be easier to remember for you. So there are three ways for calling your dad, the official one, the kind one, and the slang one. The most important to remember is, in my personal opinion is the second one, because those are the most commonly used words and I think they have the international sound which is easier to remember.

So here are the three variants:

So why I've said that the first version is a little bit more official, let's find out some interesting facts. The word 'Otac' in the Serbian language is also used for calling for the Priest. I think now you get why I said that this word is used when you want to give someone respect, but it can be also used in everyday conversation, and don't get confused.

For now, keep going with 'Tata' and you surely won't make any mistakes.

Mothers are the heart of every home and it is only fitting that you know how to call them in the Serbian language. Below are three ways for calling your mom in Serbian:

This one is pretty simple are there is not a lot to talk about. So, it's the same as everywhere else is, your parents-in-law are your husband or wife's, parents. But, actually, with Serbs, it's actually a bit different. It's not different because of genders. I will explain it like this. So you are men married to a woman, and you are going to use two words, 'таст' and 'ташта'. So the first one is for your father-in-law and the second one is for your mother-in-law.

Now you are a female married to a guy. You are going to use another two words, 'свекар' and 'свекрва'. The first one is for your father-in-law, and the second one, you already know it. Now let's see how to pronounce those words.

For your husband's parents in law:

Now for your wife's parents:

Okay, so I think you saw the difference between whether you are in the position of husband or wife. It's very important to always give them respect, and that is not a matter of language, but of pure kindness.

So this is probably the easiest part of the whole article, but before we jump down to the topic I want to explain something interesting. How do you call for children in law? So there you have a daughter-in-law and son-in-law. Perhaps you have a son-in-law like I will one day(although I agreed with my daughter she's never gonna have a boyfriend...) you are going to call him 'Зет'/zet/. Now if you have a son, and of course a daughter in law you are going to call her a 'Snajka'/снајка/.

The simplest translation for this one is 'ћерка'/tjerca/ but the more accurate one based on formal language is 'кћерка'. This is the one you probably won't hear in everyday speech, but if you want to read a Serbian book then you should probably know what does it is, because you are certainly going to find it there. The nickname for your daughter in Serbian is 'ћера'/tjera/, and it's actually the short version of this particular word.

Now don't get me wrong but unfortunately in Serbia, some people prefer boys then girls, so like son is something special to them. That's how it goes in some rural parts of this country, or in some other Serbian countries like Montenegro. We won't talk about this, because it is a matter of some other subject, but let's just see how should you call your baby boy. So the word for it is 'Син'/seen/, (yes, like on Facebook) when someone sees your message, that's how you should pronounce this one also.

You might see the answer in the title, but let's find out more interesting things and how to say out loud this word. So, brother or how Serbs say 'брат'/brat/, but as I said don't get confused if you visit Serbia and someone on the street calls you like that('брате'/brate/). The other slang word is a pretty interesting thing and it does relate with this one. This one is called 'шатровачки'/shatrovachki/. So 'брате' if you repeat it fast a couple of times then you'll hear the word 'тебра'/tebra/.

Serbian word for sister is 'сестра'/sestra/, but there are also some other names for sister, or lets better say nicknames. Like for example, if you want to know a word with the similar meaning as the English word 'sis', it's 'сека'/seka/. You can also call her 'швеца'/shvetza/, but that's more like a slang word from the '90s.

This is very similar to grandmother so we won't lose much time around here. The word for the grandfather is 'деда'/deda/, and for the grandpa is 'дека'/deka/. For other elders, it's the same as with the grandma except you only change the word 'baba' with 'deda'.

Learn Other Words And Phrases In Serbian With Ling App

You speak English quite well but are you ready to learn a new language like Serbian? If you are, download the Ling App by Simya Solutions and start learning today for free! It is the best app online, they will provide you with the best knowledge about this language because it goes more deeply into it than any other language learning platform out there. Hope you enjoyed the lesson, and you learned something interesting today. Hopefully, you can use the lesson you learned here, and if you want to get more tips please check out our previous posts like the 50 common Serbian Names and how to say I love you.