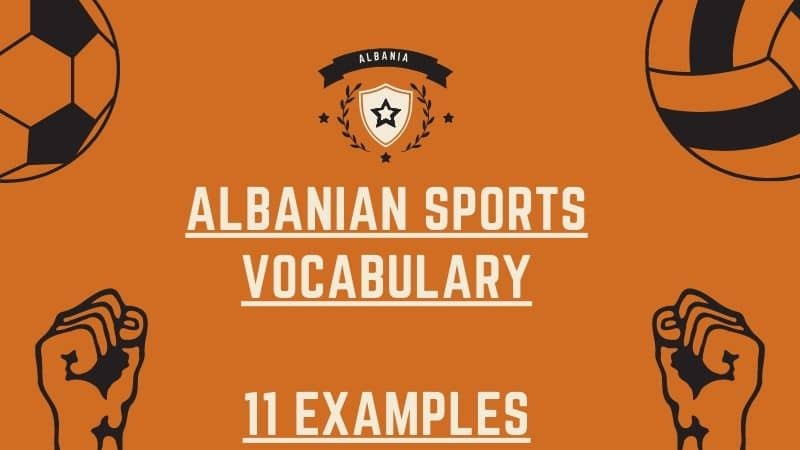 Do you want to stay active the next time you travel to Albania? Or perhaps you're thinking of making it a permanent move, and you want to become involved in a local sports club? Well, here's our list of Albanian sports vocabulary to help you out. Most are straightforward from an English perspective. For example, 'Soccer' is Futboli and 'Golf' is Golf. However, some are more difficult. 'Motor racing' is Gara me motor.

If you want a more comprehensive set of vocabulary and phrases for Albanian sport, check out Ling. We have 100s of different units, and there is vocabulary, listening, reading, and speaking practice within each unit.

Football is undoubtedly the most popular sports game in Albania. People both love to watch and play it.

The first match ever played in Albanian was between Christian missionaries in Shkoder, the 5th biggest city in Albania located on the Adriatic sea. It makes sense then that the first club founded was KS Vllaznia Shkoder, quickly followed by KF Tirana.

Not long after, an Albanian football association was formed, which officially joined Fifa in 1932.

Originally, there were only six football teams in Albania, including the two already mentioned. In fact, the first winners were KF Tirana.

When the political system changed to Communism, the government saw football as a unifying sport and heavily marketed it towards the average man. Of course, football took on a heavy political slant, and certain teams were favored. For example, the clubs Partizani Tirana and Dinamo Tirana were owned respectively by the Ministry of Defense and The Ministry of Internal Affairs.

In 1991, after the fall of Communism, things changed. To begin with, Albanian players were now permitted to play abroad. But also, free-market reforms saw a new Superliga founded. There are currently ten teams, the winners of which can play in the Champions League alongside Europe's biggest clubs.

The most notable club football result in Albanian history occurred in 1986 when Flamurtari Vlora drew 1-1 with Barcelona in the Uefa Cup. They were only 2 minutes away from winning the game until Barca equalized!

The Albanian national team has been more successful than any domestic club. One of the most famous wins came in 1946 when they won the Balkan Cup.

In recent years the biggest milestone was qualifying for Euro 2016. It was the first time they'd been to a major tournament in 50 years. However, it was far from easy going in the actual competition itself. They found themselves in a group alongside France, Switzerland, and Romania. Unfortunately, they finished bottom of the group after failing to win a match.

The most capped Albanian footballer of all time is called Lorik Cana. For many Albanian fans, he is the shining light of the national game and achieved international success playing for Paris Saint Germain as well as Lazio. He retired in 2016 after the Euro championships.

Volleyball is probably the most popular sport for women. Dinamo Tirana has had a lot of success over the years. They reached the Women's champions league final in 1979 and 1990.

In the 2018 European volleyball league, the female team won a bronze medal.

Men's basketball is also an extremely popular sport in Albania, particularly in cities with less green space and more concrete. The men's team successfully won the 2006 Eurobasket tournament, where they finished second behind Azerbaijan. Their most successful outing to date.

Albanian fighters have had moderate success in the world of combat sports. In recent years, the most successful was Florian Marku, who in 2014 won the IBF world title. Recently he had a big win in boxing at Wembley Stadium. he remains undefeated with a record of 10-0-1.

Albania hasn't had much success in Athletics over the years. Some notable exceptions are Izmir Smajlal, who won a gold medal in the Long Jump at the 2017 European indoor championships.

Luiza Gega competed for Albania at both the 2016 and 2020 summer Olympics in the 3000metre steeplechase. She would also carry the flag for the country. She became the first Albanian to qualify for an Olympic final, finishing 13th.

As with many Eastern European and former communist states, Albania has produced many exceptional weightlifters.

Albania has won 2 gold medals, eight silver medals, and nine bronze medals at the European championships. Albania has won 1 gold, one silver, and one bronze in the world weightlifting championship. They've been just as successful at the Mediterranean Games, where they've won 24 medals.

Now you've had a taste of Albanian Sports vocabulary, why don't you think about downloading the Ling app. Whether sport, medicine, checking into a hotel, or hobbies, we have all bases covered.

Our SRS flashcards ensure that vocabulary never grows stale, and all our listening exercises are recorded by native speakers. We also have a chatbot feature that allows you to practice your speaking with an A.I system.

Our grammar guides are simple, straight to the point, and non-intrusive. We know that grammar helps, but it isn't the be-all and end-all.

Finally, why don't you check out some other Albanian blogs? These are the two most popular in recent months: Albanian dating guide and Albanian moods and emotions. Reading blogs and studying Ling is the best way to learn any new language.