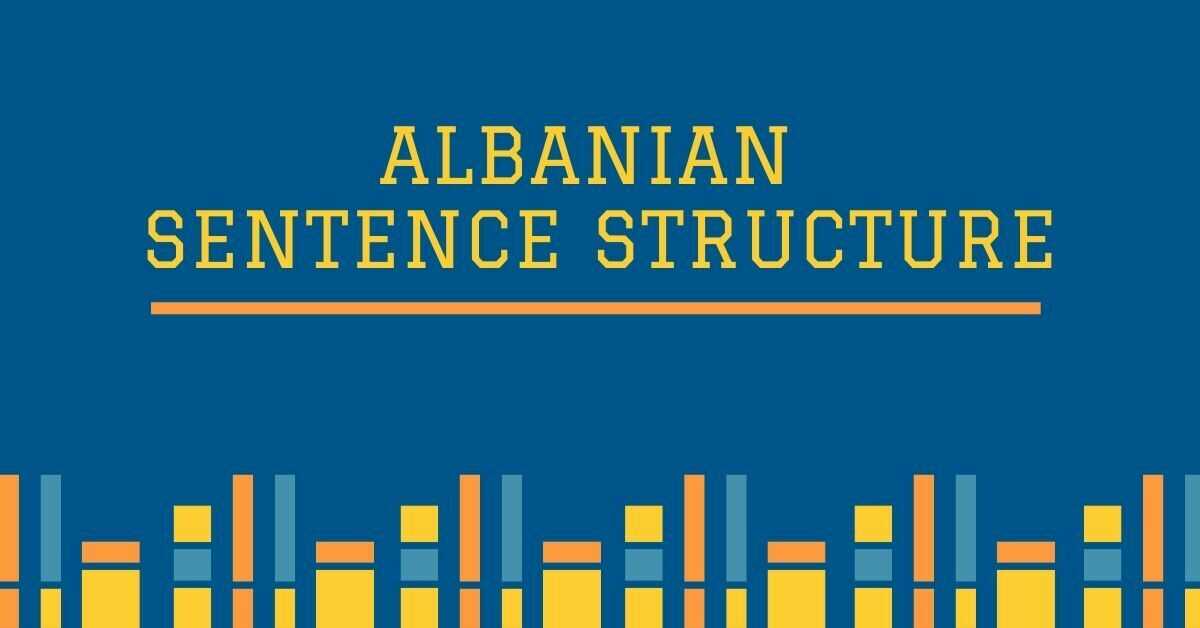 If you have a family member, partner, or a friend who is from Albania, it would be great for you to learn Albanian sentence structure as the beginning of mastering this interesting language.

The Albanian language is similar to English in its sentence construction, which follows a very typical Subject – Verb – Object construction. Nouns in the Albanian language can take on a male, female, or neutral form, as well as coming in either a singular or plural form. And just like in any other Balkan language, in the common sentence structure, the definite article is placed after the noun.

When we are talking about the verbs in the Albanian language, they are fascinating, in the sense that you can express much more emotion than you can with many other languages. With the right verb, you can express either an indicative or an admirative position on what is being discussed. For example, “flet” versus “fliske”. Both words mean “speak”, but the former indicates a simple statement such as “Ti flet shqip” (You speak Albanian), which the latter translates as something equivalent to “E shoh që ju flisni shqip” (I see that you speak Albanian).

In this article, I will try to talk about some similarities and differences in English and Albanian syntax, as the two languages typologically belong to the same parent language, the Indo-European one, but of course, each of them has its own special features. One of the most conspicuous features we will analyze is the word order in the sentence. It should be noted that the word order in Albanian sentences is more flexible than English since Albanian is a language with highly developed flexion.

For Example, in indicative sentences in Albanian, apart from the Subject+Verb Order, under certain conditions the Verb Subject Order can also be found, which does not occur in English. Furthermore, we will concentrate on the distribution of adjectives in noun phrases. A Significant difference can be noticed in the order of the noun and adjectives in both these languages.

By analyzing the syntactic structure of the sentence and the word order in these two languages we noticed that: The sentence in Albanian usually consists of a noun group and a verb group. The noun group may contain only the subject or the subject and its modifiers. The same could be said about the verb group which may consist of the predicate only, or the predicate and noun or prepositional groups that serve as its complement. As a rule, the noun group (the subject) comes directly in front of the verb group(predicate) when it expresses something known to the speaker or listener.

Owing to the fact that the English language does not have a developed flexion system, the function of a word in a sentence is not signaled by the inflectional ending (as it occurs in many languages including Albanian), on the contrary, it is determined by its place in the sentence.

Consequently, we can say that the word order in English is fixed, to a large extent, and if the given word order is disrupted, the sentence would change its meaning, which would become less acceptable or ungrammatical. We use the expression “to a large extent because other elements like sentence intonation and word stress can also affect the meaning of a sentence

Even though the literal meaning of the sentence would not change, the intent can vary considerably based on the word you stress. Concerning the word order in English, we can say that the typical one is:

In Albanian the word order in the sentence is relatively free due to the fact that it is an inflectional language, however, the most common order is:

The word order adjective–noun could hardly be found in Albanian, except for in the poetic language. In this case what happens is the unification of the adjective whereas the noun itself simply turns into the indefinite form, as you can see from the example:

The English language also has a fixed order concerning the position of adjective–noun that is the contrary of the order you notice in Albanian. This order can rarely change. And if it does, this may be more typical in poetry and famous poets use them to convey and emphasize unusual and vivid images as well as to add variation, emphasis, exaggeration, exclamation, irony, and luxuriance to literary works and to the English language in a more general sense.

It is uncertain where this language originated specifically, as there are a number of regions that the language could have formed from. However, it is believed that it began to form as the language that is understood today in the mountains rather than in the fields or along the coast. This is, fascinating, because various words that have connections with mountainous areas are original singular words to Albanian, while words in connection with the sea or farmland are borrowed from other vocabularies and languages.

Standard or modern Albanian is a revised modern form of the southern dialect of Albania, referred to as Tosk. This is what is used in the Albanian dictionary today.

Why Learn The Albanian Language?

While there are relatively fewer people in the world who will speak this language compared to many others, by learning a language that does not draw a lot of people to learn it, you could very well be in demand for such a specific skill. Free market reforms have recently opened the country up to investment from foreign businesses, particularly towards the energy development and transport markets. It is a great time to explore business opportunities in Albania.

The Albanian language, and those that speak it, have not strayed very far from Albania itself; this country and the surrounding areas in Southeastern Europe are where you will primarily find Albanian speakers. If you are looking to move to this area for work, then the Albanian language is certainly going to be a useful one to pick up.

If you want to learn Albanian sentence structure or basic words and phrases or how to wish Happy Birthday in this interesting language, you should consider using the Ling app. This language learning app will help you learn a language in a fast, easy, and game-like way.