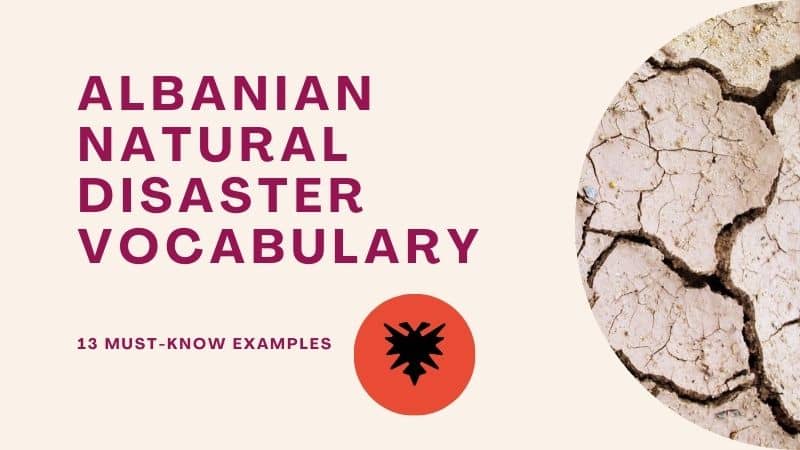 Natural disasters are an unfortunate aspect of life. Albania has had its fair share over the last few years, so studying Albanian natural disaster vocabulary is important. If things go wrong when you're on your vacation, these innocuous pieces of vocabulary could become crucial. Although some terms are far removed from English, some are very similar- for example, 'tsunami' is 'cunami,' and 'cyclone' is 'ciklon.' Read on to see more examples, and if this article piques your interest, think about Learning Albanian with Ling, where there is an entire lesson unit on Natural Disasters.

The most recent natural disaster in Albania to make international headlines was the November 26, 2019, earthquake. The earthquake measured 6.4 on the Richter Scale, and its epicenter was in the Northwest. It killed 51 people and injured a further 3000.

The worst affected city was Durres, where two apartment blocks and two hotels collapsed. The damage was so severe that a 30-day state of emergency was declared.

Albanian civilians and military forces were immediately mobilized, including 2000 police officers from all over the country. In the direct aftermath, 1000 people whose houses had been damaged or destroyed were given access to emergency tents. Aftershocks hampered relief efforts.

It was announced by Edi Rama(Prime Minister) on November 30 that the rescue operation had come to an end because all bodies had been recovered. Although the death toll was tragic enough, what made things worse was the sheer amount of property damage. Fourteen thousand buildings were damaged, and 2500 were left uninhabitable. Property damage was estimated to be over a billion dollars.

A massive fundraising effort got underway to help the victims of the earthquake. The Government initially donated 156 million leks, about $2million. Donations flooded in from everywhere, including places as diverse as the Orthodox Church, the Muslim Community, and the Catholic Church. An additional $171 million was put aside from the Government for reconstruction.

The story around earthquake damage grew deeper when it was announced that a corruption investigation was underway. Construction firms had violated business codes and construction standards. Ultimately nine people were charged with murder due to buildings collapsing because they were built substandardly.

The worst floods in recent memory in Albania occurred between December 2009 and January 2010. Similar to the earthquake, these floods took part in the Nothern region of Albania.

The floods were caused by a much higher average rainfall as well as deforestation in the area. Five thousand three hundred residents were evacuated, and 26,000 acres of land were affected. The Albanian Government had no choice but to request aid from international organizations such as Unicef.

The Albanian Government declared a state of emergency and requested help on January 7, 2010, including transport helicopters, pumps, and basic medical supplies and food. It is thought that about 1200 Albanians volunteered to help.

Climate change is undoubtedly a slow-moving natural disaster the likes of which civilization has never encountered before. A recently released report outlined how climate change has been felt since the 1990s and pinpoints 1997. The year when there was practically no snow on the Albanian highlands and the rest of winter continued to be exceedingly warm.

One of the most famous mountains in Albania is mount Gjallca. It is common knowledge that it used to be covered in snow from September until June. However, now it is difficult to find snow past April.

This season change is common for all periods of the year. In the past, trees would shed their leaves in October, but now it's late into fall(almost winter). And they've gone from flowering in January to flowering in March.

The report also clarifies that since then, winters have become shorter and milder, and summers have become longer and hotter. However, this also leads to flash flooding when a month's worth of rain falls in a day.

Sea levels have also become a concern, particularly to people who live in areas affected by tidal erosion. In parts of the Adriatic Coast, the sea has eroded the land by almost 50m, resulting in a loss of housing and natural habitat--particularly damaging to coastal pine forests.

As you'd expect from a climate where droughts have become more sustained, fires have increased in Albania. In 2006-2007 there were 352 forest fires in the country covering a giant chunk of land. This is terrible both for biodiversity as well air pollution.

Unfortunately, the Albanian Government is largely unresponsive to dire warnings released about climate change. It is usually down to the various NGOs to work on solutions, remind the Government of its responsibilities, and create progress.

We hope that Albanian natural disaster vocabulary gave you a little taster of what Ling can offer.

We, of course, have lessons on natural disasters, but that's only a tiny selection of our prospectus. We have reading, writing, listening, speaking, and grammar practice. Most importantly, all of our audio is recorded by native speakers, so you are getting a genuine accent.

Don't also forget to follow this blog. It is updated weekly and already has months and months of great content. Particularly liked by readers has been The Albanian economy and Albanian Government. Read on today and be sure to download the Ling App by Simya Solutions.