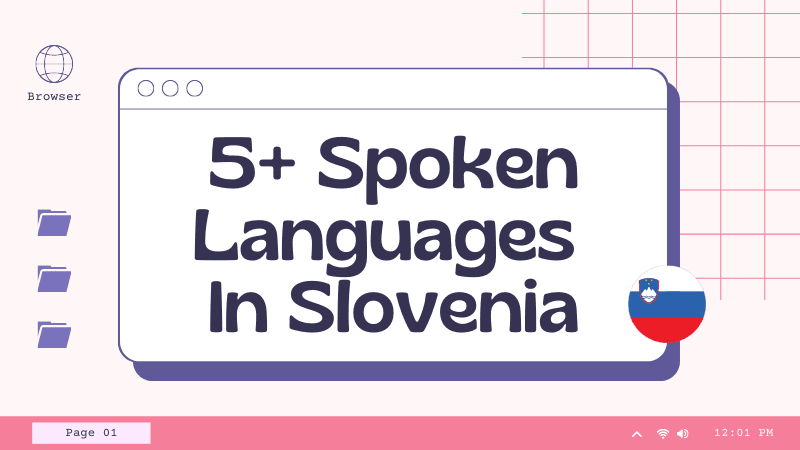 Planning to visit Slovenia soon? This blog will walk you through all the spoken languages in Slovenia and dig a bit into how and why Slovenians are considered exceptional at speaking and understanding languages other than their standard language in the entire European region. Here, we will also dive deep into the grammatical status, cultural information, and historical significance of the languages. So let the enlightenment begin!

Where Is Slovenia Located?

Slovenia is a small country in Europe situated between Italy, Croatia, Serbia, and Austria-Hungary. It is between the Balkan Peninsula, Central Europe, and South Europe. It is a piece of land that stretches up to 29 miles and borders the Adriatic Sea. It has different disputed regions with Italy and Croatia. Given its unique geographical location, many are interested to discover what this country has to offer. Perhaps, you are also wondering if it is worth visiting the place.

The languages spoken in Slovenia are generally categorized as minority languages, immigrant languages, and foreign languages. The first category includes Italian and Hungarian, the second includes Croatian, Serbian, and Bosnian, while the third includes English and German.

Despite having a native language, the diversity of languages and dialects and a mix of cultures found in Slovenia are also depicted in its literature. "Vsaka vas ima svoj glas" is a Slovene proverb that means "every countryside has its voice." This proverb represents that Slovenia is a country with a lot of diversity (in terms of languages).

The Slovene language is the official language of Slovenia which has a lot of words influenced by the German language. It is primarily spoken in Slovenia, neighboring countries (Italy and Austria, etc.), and in some Slovenian-speaking minorities like Canada. However, Slovenian is not limited to some continents and extends beyond that. After World War II, a significant number of Slovenian citizens had migrated to Argentina, and thus now we see some people speak the Slovenian language in South America.

The Slovenian language belongs to the South Slavic language family. Generally speaking, it is a mix of all the Slavic, Germanic, and Romance languages. However, when all the linguistic technicalities are taken into account, Slovenian is considered a part of Slavic languages.

Slovenian is rich with dialects, and there are various dialects of the Slovenian language. There are as many as 46 distinct dialects of Slovenian. Prekmurjeis the only Slovene dialect in standard Slovene. This dialect is spoken chiefly in the Prekmurje, a region of Slovenia.

The grammar in Slovene is complex, which is difficult for the native speakers too at times. It has different rules for each word's duality, conjugations, and genders, including numbers. The dual rule of Slovenian has particular words based on the number of objects/ people/ nouns in general. For instance, I, we two, we three, etc.

The sentence structure of Slovenian is an SVO (Subject, Verb, Object) word order which is the same as English. The word order in Slovenian is not a rigid one. The position of the words can be changed as the word order is quite flexible. The consonant clusters in Slovenian are different from many languages. This is the reason why Slovenians have such unique pronunciation.

It is also the oldest written Slavic language, and various Freising manuscripts are evidence of that. Slovenian is known to be initially spoken by some cavemen or Neanthedrals.

Freising manuscripts were written around 970 A.D and included writings that had various sets of truth as well as scholarly lectures in them. Freising manuscripts also hold great importance for the Slovenian language as they indicate how old Slovene is.

The Austria-Hungarian Empire captured Slovenia in the 1800s and thus made it a part of its own Empire. In their quest for independence, they got help from Yugoslavia. In that period, they were suggested to use Serbo-Croatian. Slovenians intelligently denied the request and accelerated the use of the Slovenian language to retain the essence of their native tongue.

Kingdom Of Slovene, Croats, And Serbs

The reason why Croatian and Serbian are commonly spoken in Slovenia dates back to the era of world war II. Taking you back to 1918, many parts of these countries were taken over and occupied by Italy. But 23–24 November of 1921, a treaty united Serbia, Croatia, and Slovenia, thus making a small kingdom of these three countries. Slovenia did not gain independence till 1991 (when the Union of Soviet State Republic dissolved).

Many people in Slovenia speak the Croatian and Serbian languages. The older generation in Slovenia is better and more proficient at speaking Serbian and Croatian than the younger generation. This is because in the former Yugoslavia and the Kingdom of Slovenes, Croats, and Serbs, the people lived together and learned all the languages to communicate better with each other.

Other Spoken Languages In Slovenia

In Slovenia, many foreign languages are also spoken. English and German are the most common foreign languages spoken in German, which are not a part of the Slavic group and thus are different from Slovenian in terms of pronunciation, words, and grammar. Still, German seems to have the edge over English in this regard. Let's dive into the ocean of knowledge about Slovenians speaking German and English.

English is the first foreign language of Slovenia. As mentioned earlier, the older generation was mainly fluent in and used Serbo-Croatian to communicate. However, the new generation tends to speak English more than the other languages. These younger generations tend to use a lot of English slang and words in their everyday life.

As the younger generations are immersed in watching English series and movies, they are highly influenced by English. Slovenes are better at speaking English than their neighboring countries like Italy, Croatia, and Austria-Hungary (perhaps the best among all).

Slovenes are fond of speaking German. They often have to face a lot of criticism for having better ties with Germany and trying to immerse themselves into speaking German. German was the second language (after English) taught in the schools as a foreign language in Slovenia.

As reported by the European Union and based on the data by European Commission, Slovene is among the countries which do not have German as an official language having the highest level of proficiency in German. The other countries include Luxembourg, Denmark, and the Netherlands, thus making Slovenia the fourth country with most people understanding and speaking German quickly. The Styria region of Slovenia is where you can find tons of German speakers.

The city municipality of Koper is one of four residential municipalities for Italian speakers in Slovenia. The other three are the municipalities of Piran, Izola, and Ankaran. Just like Hungarian, Italian is the first language of the protected Italian minority based on minority protection laws.

Congratulations, now you know all about the languages spoken in Slovenia, along with a little bit of insight into the history of each language. Learn Slovenian in your comfort zone and the vicinity of your own house by downloading the Ling App. The Ling app offers 60+ foreign language courses and different quizzes and flashcards for you to learn in the quickest way possible.