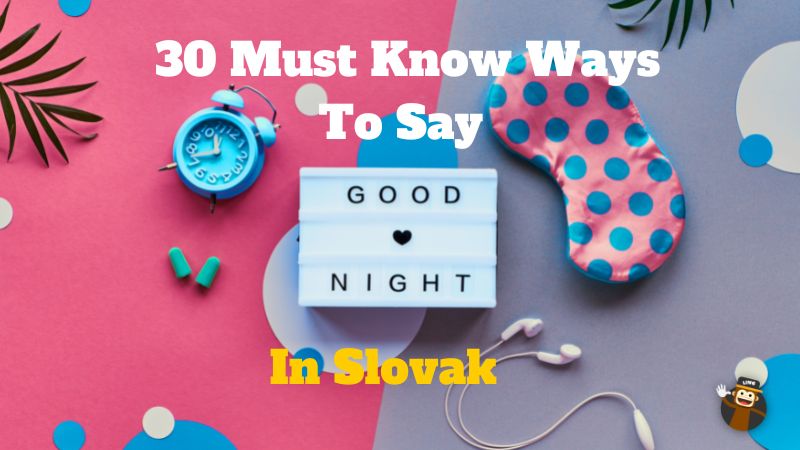 Knowing how to wish someone ‘Goodnight’ is one of the common phrases in Dutch that you’ll definitely want to know. It’s polite to wish the person you’re with a good night in Dutch and to respond when someone else says goodnight in Dutch to you!

So how do you send someone off in the evening in The Netherlands? Do you say sleep tight, or good evening, good night or goodnight?

In this lesson we’ll show you more examples that we’ll translate for you, of how to say goodnight in Dutch. The article will include ways to wish children, lovers or partners, and even acquaintances goodnight.

To help you practice speaking and listening Dutch better, we’ve included translations and their pronunciations. Just click on the blue ‘play’ button to listen. Then repeat until your accent matches what you’re hearing. You’ll sound like a native Dutch speaker in no time!

The Difference Between A Dutch Good Night And Goodnight

It doesn’t matter which language you’re speaking, there’s a big difference between good night (goede nacht and goodnight (Welterusten). The two sayings are often confused. Typically in English, you use good night when describing that the evening was a good one; that you had fun. For example, tonight was a good night! However, if you’re using it as an evening send-off greeting, you would use goodnight (no space).

The major difference grammatically, is that goodnight is a single word and is classified as a greeting. Good night is two separate words consisting of an adjective and a noun and is used to describe evening or night times.

What’s interesting about the Dutch language, is that according to the English Dutch dictionary, good night in Dutch is sometimes used interchangeably with goodnight. This can make things a tad confusing, so here are some examples translated into Dutch to show you what we mean below.

How to Say Goodnight In Dutch And Other Related Expressions

Goodnight is used as a greeting to say good bye or goodbye to someone at the end of an evening. It can be used as a single phrase, or in sentences and questions. Here are some more examples of how to say good night in Dutch or goodnight. The translations given have virtually the same meaning as they do in English with some exceptions.

Here are some of the most common expressions for goodnight in Dutch. Also note that in the Dutch language there is some confusion! Dutch goedenacht (no space) can also be spelled goede nacht.

These examples are more on the romantic side of wishing someone a good night in Dutch, although the last two examples could be used to wish children a good night as well.

You may say some of these phrases when wishing children goodnight in the Dutch language.

Here are some questions you may ask a friend or family member about their evening out.

If you’re reading this at night then we wish you a Dutch good night, goede nacht! Be sure to bookmark this for quick and easy access to all the ways to wish the people in your life goodnight in Dutch, or soon to be in your life if you’re planning to visit The Netherlands.

Have you ever tried to learn Dutch before? How about German? Both languages are eerily similar. So if you are learning one, you can easily pick up the other. Why not start with Dutch? You’re already here learning!

Why Learning Dutch With Ling Is The Best Choice

First of all, Ling App is accessible anywhere you have internet access. You’ll learn all the basics such as,

If you’re not a beginner that’s great! Ling has lots of lessons for you too.

Our goal is to make you a fluent speaker through fun activities, quizzes, and we’ll even help keep you accountable for your learning. Learning Dutch with Ling will involve listening, speaking, reading and even writing!

Ling has over 10 million downloads and it offers over 60 languages. Head over to Google Play or the Apple Store to check it out and learn even more Dutch language skills.