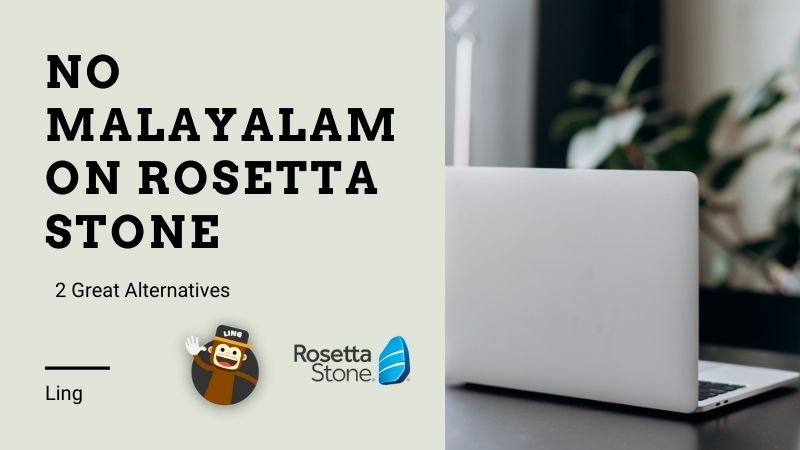 We have some good news and some bad news for you. First, the bad news; there's no Malayalam on Rosetta Stone. Second, the good news; we have some great alternative options for you today to learn the language!

Number 1 among them is Ling. Ling is an exciting company that you should be keeping an eye on. First launched in 2017, it has skyrocketed to the top of the most downloaded language apps list. Ling is constantly updating its products, and even this month has announced a brand new update to check out!

What Are Some Interesting Facts About Malayalam?

As there is no Malayalam on Rosetta Stone, you can learn Malayalam On Preply (the best place to find native speakers).

The last few years have been particularly tumultuous for language learners(and teachers). In the first months of the pandemic, the education system was turned on its head, and nobody knew what the future held. Looking back now, it seems clear that the Coronavirus has been a tremendous boon to online language courses like Preply.

Preply is not a language learning app in the style of Rosetta Stone. Instead, it is an app that connects you with native language tutors to (mainly) improve your speaking. Tutors set their price, you do a trial, and if you like the tutor, you take online lessons with them. Preply is undeniably the market leader and teaches 100s of thousands of students per year.

(Although this list largely focuses on cons for students, it is worth mentioning that there are cons for teachers working for Preply, namely that they don't get paid for trial lessons. This is a tremendous detriment to teachers who have to bear the financial strain(particularly if they're new teachers and starting out at a low price).

Ling is the best interactive software for learning lesser-known languages in a standard language learning app form. Of course, Ling is not like Preply, but it is just as effective at helping you learn a new language and it's a perfect and far more affordable option as there's no Malayalam n Rosetta Stone.

Ling is best used for practicing Malayalam words and listening. With our SRS flashcards, new phrases and vocabulary will be retained in your long-term memory. There is also practice with Malayalam grammar as well as spoken Malayalam with our chatbot.

Note: There is also a program called Ling Live, which is very similar to Preply. However, at the moment, it is solely focused on students learning Thai. However, keep an eye out for possible expansion into different languages, including Malayalam.

If you enjoyed this blog and found to solutions to there being no Malayalam on Rosetta Stone, why not check out some others in our dedicated Malayalam language blog including names of vegetables in Malayalam and beautiful in Malayalam.

Learning Malayalam with Ling language lessons has never been as easy. See you next time.