No Lithuanian On Babbel? The #1 Best Alternative! 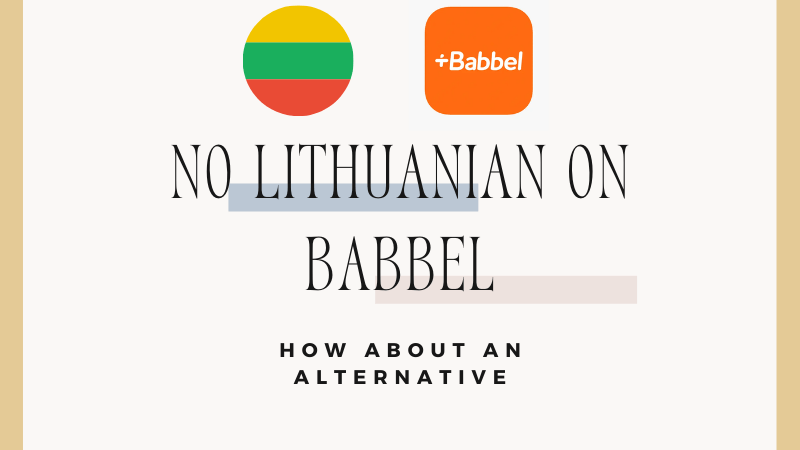 As things stand, there's no Lithuanian on Babbel, and it remains unlikely that there will be in the future. Basically, it all comes down to money; there simply aren't enough Lithuanian speakers out there. Today we're going to look at why Babbel won't start a Lithuanian course, the alternatives to learning Lithuanian, why you should learn Lithuanian, and why you should visit Lithuania.

Lithuanian is one of many baltic languages in the set of Indo-European languages. Lithuanian uses the Latin alphabet but interestingly has elements of ancient languages such as Vedic Sanskrit.

Why Is There No Lithuanian On Babbel?

Reasons To Visit (And Learn Lithuanian)

It goes without saying that the number 1 reason to learn Lithuanian is that it will bring you closer to native speakers. There could be numerous reasons you want to do this, perhaps for travel, business or fun. We're going to assume that you want to learn Lithuanian because you plan to travel there at least for a period and give you reasons why Lithuania should be on your bucket list.

Put Simply. There is no better, more comprehensive alternative than learning Lithuanian with Ling. The developers of Ling understand that just because it isn't spoken by many people doesn't mean it doesn't deserve its day in the sun.

It is a well-rounded app that allows you to practice reading, writing, speaking, listening, Lithuanian grammar, and vocabulary. A leaderboard also fosters a sense of community and allows you to compare yourself to other learners. We have everything from beginning Lithuanian to advanced Lithuanian. We do modern languages better than any other app.

Unfortunately, at the moment, we don't have a dedicated Lithuanian blog but think about following our language tips blog that provides a useful guide on language trends as well as app reviews.

This is a fascinating Indo-European language to learn. Come over and check it out.