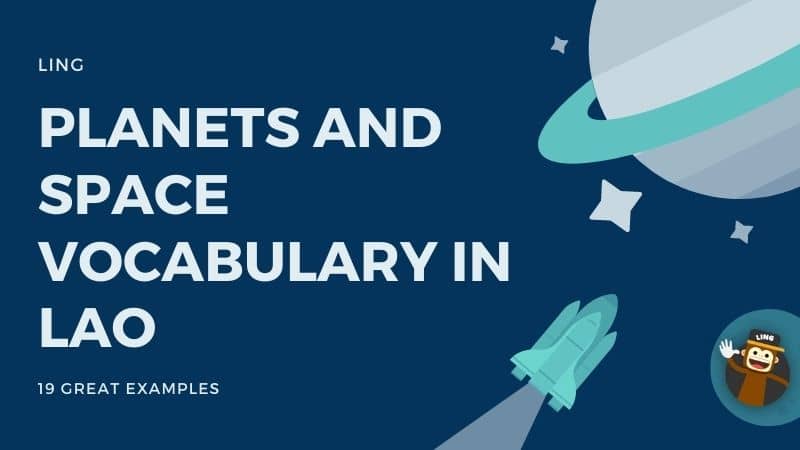 This is a little bit of a strange one today, but I'm writing it under the presupposition that there are some budding astronomers out there who are also learning Lao. Here we have it: planets and space vocabulary in Lao.

Want an app that's out of this world? Don't be put off by the structure of Lao's tonal language. Check out Ling! Planets and space vocabulary in Lao is just one of 50 units on various themes concerning the Lao language. If you've used an app like Duolingo before, you'll quickly understand how Ling works. We just do the same thing but for lesser-spoken tongues. This is language learning done the right way!

Stargazing In Laos - Planets And Space Vocabulary In Lao

If you know a little about the ecology of Laos, it's probably that it's extremely rural, and that means darkness! Perfect for stargazing.

Recently Laos started the Mekong Astronomy program, where stargazers can observe the night sky. The connection between Laos and the stars goes back to its inception. The moon can be found on its flag and Pii Mai(the New Year is based on the Zodiac). There is also the festival of Awk Phansa, which takes place on the October full moon. Locals release a small banana leaf boat containing a candle on this occasion. A similar festival takes place in Thailand called Loi Krathong.

Luang Prabang, the former northern kingdom, is the best place for gazing at the heavens in luxury. A hotel called Amantaka organizes tours with Buddhist astrologers.

Planets And Mythology In Lao

As you probably know, the planets in English are named after Roman gods and their mythology, which in turn were based on Greek Gods. But what are some examples of Lao mythology?

The Western creation myth goes back to Adam and Eve.

Southeast Asian studies experts point out the story of Khun Borom, which describes the connection between the first Lao people and the Lord of the Heaven- Phaya Thaen.

The story goes like this: The race of the Lao was threatened by a massive creeping ivy. The only way to save the people was for an elderly couple to sacrifice their lives to kill it. The couple's names were Pu Nyoe and Ya Nyoe. If you go to Lao on the New year(Pii Mai), you will see the story reenacted by theatre troupes.

As well as creation myths, there are also legends around how cities such as the capital Vientiane was created. In the Phra Lak Phra Lam, the story goes that Prince Thattaradtha created the city after he left another Lao kingdom after his father chose his younger brother to be king instead of him. First, he founded what is modern-day Udon Thani in Thailand, and then in the story, a 7 headed dragon came to him and said he needed to build a city on the East bank of the Mekong.

The actual story(as is the same with the King Arthur legend in England is much less dramatic). Scholars think that Vientiane was a Khmer settlement that was based around a Hindu temple. In the 11th century, the Lao and Thai people invaded from the north and drove out the Khmer.

The divide between religion, story, history, and folklore has always been interesting. Lao culture is filled with exciting and strange examples of all.

The first thing to say is that Animism is more popular than Theravada Buddhism in Laos, although, in many ways, the 2 are linked. Animism preserves the traditions that were in Laos before the arrival of Buddhism from India.

If you're familiar with Thai animism, you'll know that Phi (or ghosts) are central to this custom. To put it simply, Phi are everywhere if you believe the story. These ghosts or spirits can be both good and evil and can do everything from bringing you good luck to eating you if you stray into the jungle.

If you've been to neighboring Thailand( as well as sharing a local language in Issan), you can't help but notice that these spirit houses are strategically placed everywhere from road corners, to temples to outside houses. The idea is to leave an offering outside, so the potential spirit decides to reside in the spirit house rather than come inside and bother you.

After the success of Game of Thrones, dragons became cool again. However, dragons have been part of Lao folklore since the very beginning. The naga are primarily known as being the protectors of the Mekong River. In fact, the original name of the Mekong River was Nam Nyai Ngu Luang(the great river of the giant serpent).

Lao people believed that Buddhism tamed the spirits of the naga, and you can see this artistic depiction in modern Buddhist temples.

The Thai and Lao Languages are both tonal languages, and Lao words and Thai words share some commonalities. You will also notice certain cultural similarities between Lao people and Thai.

Now that you have your list for planets and space vocabulary in Lao, why not come over and take a deep dive into the topic over at the app. There is an entire unit on the subject and 50 others with sub lessons in each unit.

The question we most often get is about how even to write a few words when learning Thai or Lao is so difficult. Don't worry; we have practice writing the Lao alphabet. Even the written language can be mastered with enough time.

If you enjoyed this blog, check out some others from Ling, including relationship vocabulary in Lao and vegetables in Lao.

Thanks for reading! Come over, improve your language skills, and feel that rush of positive emotion you get from learning a new language!