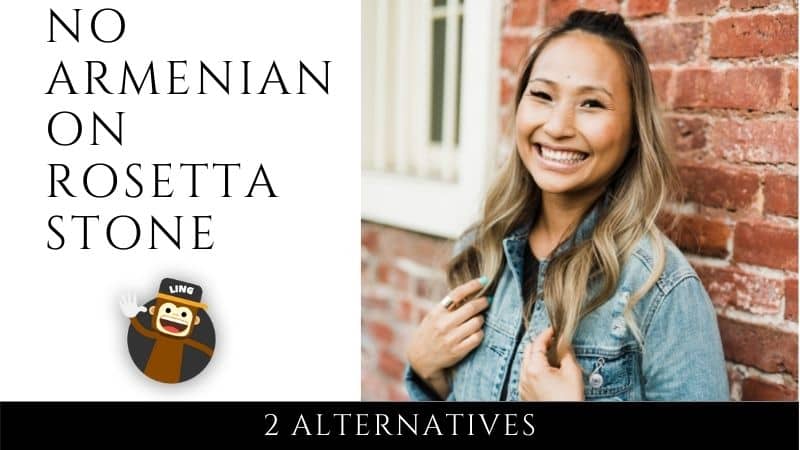 Remember: If you've come to this article because you actually want to learn this incredible language, you can't go wrong with Ling. Ling has adopted a different strategy to Rosetta Stone, and it includes 60 languages in its language catalog. Download it now and go from language learning zero to hero.

What You Need To Know About Armenia And Armenian

Armenia is a mountainous country in the North West of Asia or what we in the West would call the Middle East. It borders Georgia, Azerbaijan, Iran, and Turkey.

In the past, Armenian was thought to be a dialect of Iranian; however, it forms its branch of the Indo-European language family. There are approximately 7 million Armenian speakers worldwide, although only 3.5 million in Armenia itself-- the rest of the Armenian diaspora are mainly in Georgia, Russia, and Iran.

Armenian comes in different forms, and it all gets a bit complicated when you break it down. There is Old Armenian, Middle Armenian, and Modern Armenian, which again can be broken down into Western Armenian and Eastern Armenian. Ling blends these two latter forms of the Armenian language together as there aren't massive differences.

Generally speaking, numerous studies have shown the cognitive benefits of learning a new language with improving memory functioning and increased neuroplasticity. Put simply: learning other languages keeps your brain young. Personally, I find it really helps improve my mood. Setting goals and achieving them is a vital part of mental health.

The language learning community is changing as rapidly as the tech world in general. Rosetta Stone has had a turbulent few years. In 2021 it was bought and then resold again, finally coming into the hands of IXL learning Inc.

There has also been a change in the management. John Haas stepped down as CEO and was replaced by Matt Hulett.

A fascinating story that emerged recently was that Everton Football Club has gone into partnership with Rosetta Stone. This isn't the first time Rosetta Stone has gone into business with a major organization. They also have deals with Tripadvisor, Calvin Klien, and even NASA!

The partnership offers Everton fans a unique opportunity to join the global language learning community. Fans get access to Rosetta Stone's 24 language courses. They can also get a 50% reduction on a lifetime subscription pack.

The logic behind this partnership is undeniable. Everton is an international team that signs many foreign players. A great example of this is the 2018 signing of Brazilian superstar Richarlison.

The striker spoke zero English at the time, and he commented at the time that he improved his English through Netflix. Now Richarlison and the 12 other foreign-born players in the squad have access to the app as well as the millions of Everton fans around the world. No area is this more valuable than those who have come to the U.K because they are refugees. Everton runs a 'welcome through football,' a charitable outreach to these communities.

Everton also has the Everton free school, providing education to kids between 13 and 16 years old. They will also receive access to the Rosetta Stone program.

As with most other languages, native Armenian speakers on Youtube give lessons. The best channel we were able to find was Learn Armenian with Hayasa. Although she's only been producing content for a short time, we feel she has a great attitude that makes her a good teacher.

Unfortunately, after that, your options are pretty limited. The language learning giants have historically overlooked Armenia. That is why Ling has taken up the mantle of promoting the Armenian language.

I hope you've learned a little about the Armenian people and Armenian culture today. Now is the time to start your Armenian course, and undoubtedly your best option is the Ling App, to learn Armenian or any other language quickly.

The Ling App by Simya Solutions is more than just a set of audio lessons. It has a comprehensive system of flashcards to learn vocabulary, Armenian alphabet practice, speaking activities, grammar points, as well as a community leaderboard that allows you to measure your progress against other learners.

Unfortunately, there are no Armenian blogs on the website at the moment, but we have plenty that offers language tips such as Pimsleur vs. Anki and LingQ review.

Come on over and learn a new language today.