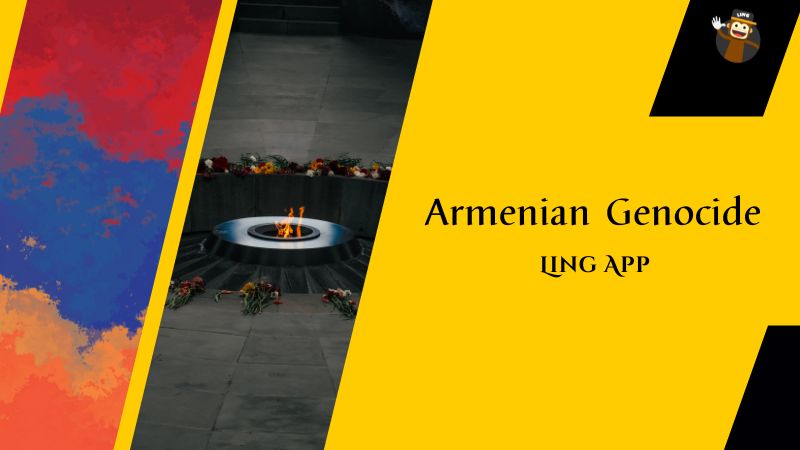 The term genocide refers to one of the most horrendous crimes that have destroyed many nations since immemorial. If you glimpse the history of genocide, you will learn about the heart-wrenching killings of states and communities.

Ethnic and racial discrimination has caused people to resort to genocide, which led to the wipeout of generations. One example of such a sad incident is the Armenian genocide, which you will learn about in this article. Let’s have one-minute silence for the honorable Armenians who lost their lives and loved ones while some political lunatics were busy grabbing power.

The Armenian Genocide is one of the terrible examples of humankind’s destruction. For every chaos in history, there’s a motive leading it to miseries and wretchedness. Similarly, the Armenian Genocide began with the conflict over religion, state, and the Armenian population, which led to the mass killing of tens of thousands of Armenian citizens.

The origin of the Armenian Genocide begins with the war of religion and authority under the Ottoman Empire- an Islamic empire formed in the fifteenth century by the Turkish tribes of Mustafa Kamal Ataturk in Anatolia.

Before the Ottoman Empire, Armenians lived in Anatolia. The Armenian kingdom adopted Christianity as their national religion, lasting until the Muslim empire’s beginning.

It began in the fifteenth century, fifteen hundred years before the arrival of Ottoman rule, before which the Armenian community had liberty in their lives and religions. But with the Ottoman Empire, millions of Armenian people were killed in death marches as the Ottoman army was dominant over Armenian soldiers.

Most of the community was Muslim in Turkish government, so Christians were in the minority. But the Ottoman government allowed the minority Armenian Christians to follow their religion freely while Islamic Shariah was superior.

Aim Of The Armenian Genocide

The primary goal of the Armenian genocide was to diminish the Armenian population, prevent them from spreading their kingy cases and wipe out followers of their, in many cases, religion.

Beginning Of The Ottoman Empire

The Ottoman Empire started in the fifteenth century and was founded in Anatolia- now called Asia Minor (the Asian part of Turkey).

The throne was built up by the downturn of the Seljuk dynasty. At that time, Cilicia was also conquested along with Armenia, and most of the Middle East’s Armenian population was under the Ottoman Empire’s rule.

During the Armenian genocide in world war I, millions of Armenians were killed in death marches to the Syrian desert leading to the rule of the Committee of Union and Progress (CUP), also known as young Turks. Between 1915 and 1917, in the middle of world war I, the Ottoman empire waged this war against this minority group, nearly destroying the Armenian diaspora. At that time, many Armenian women and children were forced into Islamization (a phenomenon that most Muslims condemn, i.e., forced conversions).

The Conflict Behind Genocide

You should know that before the beginning of this genocide, the Armenian population lived peacefully under the rule of a multireligious, multicultural, and multi-language empire. Everyone was allowed to follow their own God and language, but the level of freedom varied based on the ruler of that empire.

Fear Of The Russian Army

As Russia was part of the Ottoman Empire, Muslimsght that the Armenians living along the Russian borders might be against them in the war. This led to the merging Muslim families with the Armenian population, diluting the Armenian intellectuals with most Turkish officials.

In 1914, the war began with European powers and the ottoman empire against the Russian realm. At that time, although Armenians were fighting against Russia with the Ottoman Turks, the loss of the war in 1915 from Russian forces blamed Armenians for the loss.

The Armenian people were now under the influence of Turkish authorities, so although they were permitted to follow their own religious beliefs as an Armenian minority, they were not treated with equal rights and justice as other Muslim Turks.

They did not have legal rights. They were not thought of as the same as Muslims. On that same note, Christians had to pay more taxes than Muslims. Similarly, they were not having political rights as the Armenian political organizations did not have that much power.

Now, here we will discuss all the significant events of the war and the Armenian genocide.

It was a group of believers who seized power in the capital of the Ottoman Empire – Constantinople, in 1908. This party was formed by Sultan Abdul Hamid and other officials, and they created the Committee of Union and Progress (CUP) as a secret council in 1906.

When they got the power and the rule over the empire, many Armenian families supported them because the young Turks promised to burn the candles at both ends. The Armenian minority had the hope of justice with them.

The Young Turks wanted to use the Ottoman forces and build a secular state with equal rights for all citizens, including Armenians. They formed the political system in the empire, and parties were made based on ethics and race.

But there was violence between some troops of both communities and a fierce fight between Ottoman soldiers and other irregular tribes. Many civilians died during the conflict, and the estimated death rate for Muslims was about 2,000, and that of the Armenians was about 20,000.

As mentioned, the Ottoman Empire got into this war in 1914, along with Germany and Hungary, against France, Russia, and Great Britain.

The Russian empire fought powerfully against the Ottomans. The Ottoman army fought but was not able to win over them. It was in the last days of April 1915 when France and Russia attacked the empire forcefully and gained success over them.

This was a wrong time for Armenians because the empire blamed them for their loss, and under pressure, the government gave orders for their massacre. The Ottoman army arrested many Armenian officers from the capital during the war, and at that time, they were shifted toward eastern Armenian.

This began the Armenian genocide convention, which continued until the twentieth century. The Ottoman empire claimed they had contact with the enemy, and thus Armenians became the victims of atrocities committed by the empire.

The Germans were the actual eyewitnesses to terrible views of the world war and the Armenian Genocide.

During this world war, the Armenian Massacre happened daily, causing much chaos. Many Armenian children and women were killed mercilessly, burnt alive, and driven out of the city.

The officers took orders from central offices, and mass shootings and explosions were implemented on all the citizens. There were different kinds of acts of violence done by the Ottoman armies. Men of all ages were killed, and many Armenian women were sexually assaulted. All these crimes were happening on both local and higher levels.

Many citizens tried to reach the concentration camps but were killed on the way and were miserable with hunger since they had no food. Starvation was getting worse daily, and Armenian villages were burnt while several Armenians committed suicide.

The government forced its Armenian soldiers into labor battalions. They were headed towards eastern and southern Turkey and were forced to fight in all worse conditions. There were around 600,000 – 1.5 million deaths of Armenians. It is one of the most shameful genocides of history.

Keeping The Genocide A Secret

Well, as all of them were on sixes and sevens hoping for help, the government hid all the atrocities from the outside world. Thus, people from other places have no idea what is happening. The government even announced the entire killing of news journalists and other resource persons.

But the western newspapers and journals have covered many of the crimes of the empire done against humanity and law. Many books were published regarding Armenian genocides, and many lawyers took the problem seriously. These steps made the public somehow aware of the genocide.

After-Effects Of WW I

The war finally ended in 1917, and the enormous slaughter of Armenians stopped. However, they were still facing starvation under the Ottoman Empire’s rule. The Russian army withdrew its troops and ended the conflict, and the Armenian refugees were given some occupations for living.

It took almost two years for refugees to get back to the settlement. Many of them died because of starvation and diseases. Their leaders gathered many orphan Armenians and Armenian women who had to convert to Islam, sadly, forcefully. Many Armenian groups also took a negative influence, and they killed a myriad of Muslim tribes as revenge for their genocide.

On account of the ceasefire, allied governments executed the battle criminals. Grand vizier had learned that 800,000 Ottoman Armenian citizens had laid down to death due to norms and activities for the state power and addressed people by saying that humanity is shivering and forever will in the face of devastation.

The court and the jury stated firmly that most of the Armenians were shaken down to death by the top leaders of “CUP.” Eighteen assassins were sentenced to death for their immoral act, out of which only three were carried out to end as a reminder and had their trial in Absentia.

The Ottoman reign was erased by the Treaty of Serves for stocking the dangles and gifted Armenia a large area in Eastern Anatolia.

An extensive belief among the Armenian Muslims hindered the execution that exploiting Armenians was no such felonious crime. The crimes held more essence day by day, and the building up of the Turkish nation-state was asserted.

Talaat was butchered in Berlin on 15 March 1921. The action of the ARF was converted to kill the Armenian criminals.

The Armenian massacre was considered the uppermost state of terror imaginable until world war-II. Some breath-catching words, such as race extermination, were given to this monstrous terror, considering the great crime of ages.

Kurds and Alevis then replaced Armenia as the greatest foe of Turkey. The government of Turkey later stated that the act of Armenian deportation was for the sake of protection from threats from them and as they were engaged with Russian forces.

It was not done willingly for their massive killing. In addition, many Turkish citizens supported the government, while some other Kurds tribes who were also victims of political injustice witnessed the Armenian genocide.

Hoping this blog post has helped you learn about the history of the Armenian genocide and the sufferings of that time. If you want to know more about the Armenian history, culture, or language, check out the Ling App.

Ling App specializes in teaching different languages, but most importantly, it plays a significant role in spreading awareness about some dying languages like the Irish language and languages spoken by the minority in the world, like the Armenian language.

You can go on to the website for further details and queries. Download it from Google Playstore or App Store and start learning Armenian now!