Are Filipinos Asian? 5 Facts For A Perfect Kickstart 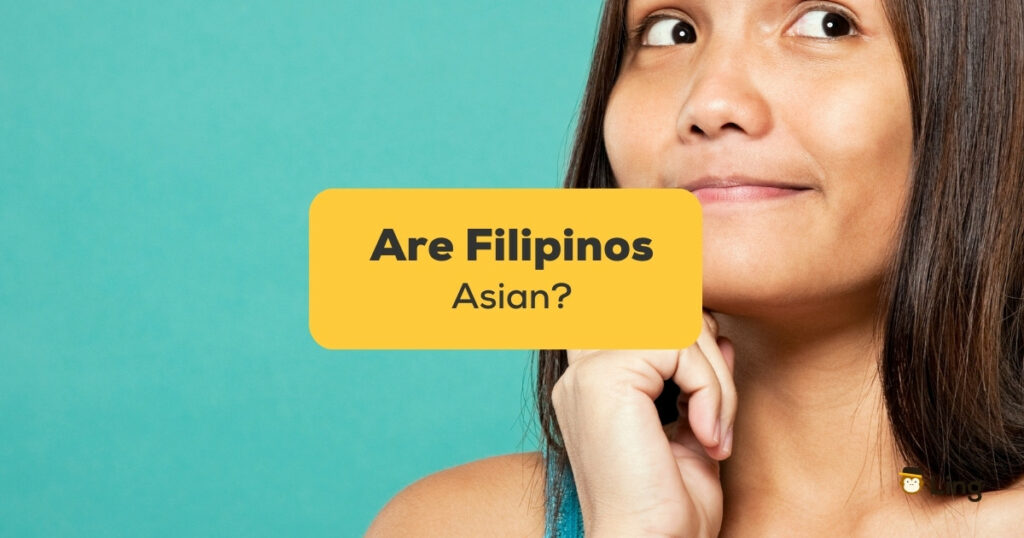 If you have ever been to the Philippines, you must have felt curious about their history. Where do they come from? Why is there a lot of variety among people in the Philippines? Filipino people are culturally divided into plenty of ethnic groups, and their history is fascinating.

In this article, we are going to discuss a brief history of the census in the country. If you are learning the Tagalog language and are interested in Filipino people, then this article is especially for you.

Are Filipinos Asian? A Brief History

The chronicle report of the Philippines (a country in Southeast Asia) mentioned that 1587 was the time when the ancestors of Filipinos stepped into California; they are Asian Americans. America has so much influence on Pinoys that forty-eight percent of them call themselves Pacific Islanders and Filipino Americans or Asian Americans due to geography and shared descent. You can also check out our blog post about Filipino-American communities.

According to US Census Bureau (a data provider agency), Pacific Islanders are the people who belong to the three domains of Oceania; and those are “Polynesia, Micronesia, and Melanesia”. Yet, the Philippines does not belong to any of these. Strange, right?

Filipinos have also been ruled by the Spanish, and the era was terminated by the US in 1898. It shares diplomatic relations with countries like Vietnam, which tightened during the Vietnam war.

If we look at the population division in Guam (the largest island in Micronesia), thirty-seven percent of the population is Chamorro, while twenty-nine percent is Filipino. Some descended from the political recusants who were brought as farm laborers by the Spanish and Americans. While others resettled after world war two for work.

In comparison, if we look at the population division in Hawaii, thirteen percent are Filipinos, while nine percent are native Hawaiians. Many Filipinos resettled here on islets as laborers for work, where they also joined Chinese, Japanese, etc. Most of them do not profess themselves as Pacific Islanders based on shared physical features and are from the mainland US.

People out there have different views about their identities. Some call themselves Pacific Islanders, while others as Asian. There can not be an authentic and single statement about which region they belong to. We will take a look at the arguments of different Filipinos.

It’s important to know what could offend the Filipinos and try to be sensitive about that. Let’s look at some statements of the renowned people of the Philippines.

Margarita says that she has been growing up there in the Philippines, and in that long period, she has never heard of the term Pacific Islander. She said that she has grown up thinking that they are geographically part of Asia. She first listened to this term when she moved to the US.

Ryan did not have a definite description of his identity. Instead, he says that scholars would point their views out, and there would be an endless debate on this matter. Yet there is a long history of the Philippines’ interaction with the Pacific Islands and then with the mainland. He further ends the discussion and says that we (Filipinos) are both (Pacific Islanders and Asians).

Jiyo says that she defines a Pacific Islander or an Asian as a person who is recognized with Asian culture. She identifies with whatever she has seen on Filipino media channels like TFC and GMA.

Amber gives a very technical say on her identity. She says that the Philippines is the set that encircles many Asian countries, so according to her, Filipinos are a mix of both.

Chanel identifies himself as an Asian, yet he also says that he shares his roots with Hawaii, thus, he can also call himself a Pacific Islander.

Alecca identifies herself as Asian-American. Asian Pacific Islander and a Filipino. She says that the Philippines’ history has been a mix of these three, so this is her identity, yet she adds that she is a Filipina, no matter what their history says. They can identify themselves with whatever they are comfortable with.

Filipinos Are Not Asian; At The Same Time, They Are Asians

Filipinos are considered Asian because the Philippines is officially listed as a Southeast Asian country by the UN. You should listen to different Filipino podcasts to know more about this.

There are two significant reasons why Filipinos are not considered Asian, and those are given below;

America and Spain have significantly influenced the Philippines so it has the most diversified culture. If we take a deeper analysis of how Filipinos feel about their identity, there are three points that we will touch upon.

You should check out the map of the Philippines to know more.

Modern Filipinos are a mix of Spanish, Indonesian (because the Phillippines have shared diplomatic relations with Indonesia since 1949), and Chinese parentage. They do not have the same ethnic group but have many similarities in most aspects of cultures and traditions.

According to a renowned anthropologist, Peter Bellwood, Taiwanese and Chinese were the first squatters in the Philippines, almost around 4000 BC. So they share an identical predecessor. The Philippines has been a destination for many immigrants from Indonesia, China, and other Asian countries.

So ethically, we see their mesh with Asians.

Comparison Between Asian And Filipino Cultures

We will discuss similarities between Filipinos and the culture of some major Asian countries worldwide.

Singapore And The Philippines

Singapore and the Philippines have a lot in common so let’s take a walk down the lane.

Proud Of Their Food

Both these countries are popularly known for their cuisine. In the Philippines, you will come across the street food scene that is famous for its grilled eats. These street foods and snacks are notable, especially in Metro Manilla, like in Carinderia (a renowned food house in the country).

Singapore is famous for its busy hawker centers, coffee shops, and a variety of chicken rice.

Both are culturally diversified and have distinct racial makeup of communities. The Philippines is an archipelagic country with over seven-thousand islands and different provinces. Each province has its own culture, unique cuisine, languages, etc. In parallel, Singapore also has a wide variety of cultural aspects, which makes it a multicultural country in Southeast Asia.

English is the primary language in both countries. Both countries have their version of English called Singlish in Singapore and Taglish in the Philippines. These are the same as English, but a little spice of their language is added.

Thailand And The Philippines

It is observed that the people of Thailand (a country in mainland Southeast Asia) and the Philippines are similar in appearance. Party culture is viral in both countries. But there are lots of differences between both countries rather than similarities.

Let’s break it down into categories:

Culturally they are pretty different. Thai people follow Buddhism while Filipinos have catholic upbringings. Thais are very gentle and relaxed people who do not stress their heads a lot, while on the other hand, Filipinos have a bit of westernization in their slant due to American and Spanish influences.

Thais mostly rely on the use of herbs and spices in their foods. On the other hand, Filipino people commonly use vinegar, citruses, and sour fruits to add flavor to their dishes. Their desserts are also slightly different.

There is a variety of Filipino languages due to western influences, and English is the most common language used among Filipinos. While on the other hand, Thais have a tonal language called Thai, derived from primitive languages called Sanskrit and Khmer.

Indonesia And The Philippines

Indonesia and the Philippines share a long history, making their culture quite similar. Let’s take a look and compare the prominent features of both cultures.

Both countries have diversified languages. The main reason is that they have a wide range of provinces, each with a unique language. Seven hundred languages are spoken in Indonesia. And the Philippines also has a range of one hundred and eighty languages used there.

Both have a variety of ethnic groups; the Philippines has one hundred and eighty-two while Indonesia has about one thousand eight hundred groups living in there.

The national language of the Philippines is Tagalog. Filipinos have been influenced by Spain, China, Malaysia, and America, so Tagalog has its tubers in Malay, Japanese, Mandarin, and Chinese. These similarities also show that Filipinos are linguistically Asian too.

Hispanic is the term used for the nations and people who have taken influence from Spain in terms of culture, language, etc., or who have been under Spanish colonial possession.

The Philippines has been in the colonial era of Spain. Spain occupied the Philippines in 1521, and this occupation lasted for over three hundred years.

Filipinos Are Both Asian And Pacific Islanders

The following points will prove that Filipinos are considered Asian and also Pacific Islanders.

By continental association, Filipinos are Asian because the Philippines is located in Asia, so its people have an Asian identity. While on the other side, if we look at the Pacific Islanders’ aspect of the Filipinos, we also see that the Philippines is situated on the Pacific Ocean, which can be called an island because all the islets are located on this ocean. So Filipinos can be considered Pacific Islanders.

Filipinos Do Not Have A Specific Identity

Filipinos have been a colony of many countries, especially Spain and America, which have ruled over them for a long time. During that time, they left their traces on the Filipino people. It has bestowed the country with diversity in every aspect, like culture, cuisine, language, etc.

Now Filipinos are a mix, having traces of many other cultures. It has similarities with Asia, like food, tradition, cultures, festivals, etc. Yet we can not say that they have been proven Asian. Filipinos are Pacific Islanders, Hispanics, and Asians as well.

Ling app is a language learning app that offers more than fifty languages, including languages that aren’t as popular. If you want to start your journey learning the Tagalog language, there’s no other engaging path than with the Ling app!

Are you curious to know more about Ling app? Download it today from App Store or Google Play Store!